Need to match a column in two tables

I am working with a dataset which has a bug and unfortunately I need to carry on with it.

The first table has AppName and AppID. However, because of a bug in the source system, there are multiple app names with same AppIDs.

So for AppID 1200, only App02 is generating traffic so this is the valid app while the other two (App01 and App03) are invalid.

However, there also some valid apps which are not generating any traffic as of now and hence don't appear in traafic data table. So they are not getting flagged as being a valid app.

Is there any way to resolve this? When there are multiple AppNames for an AppID, I want to just take the AppName which is generating traffic. When there is single AppName and AppID, then I want to take that AppName too (irrespective of whether it appears in traffic data or not)

Any help would be appreciated!

you can use below script, it will give your result, 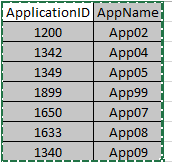