Announcements
QLIKWORLD LIVE! MAY 16 - 19TH, EARLY BIRD DISCOUNTS! REGISTER TODAY
Options
Turn on suggestions
Auto-suggest helps you quickly narrow down your search results by suggesting possible matches as you type.
Showing results for
Search instead for
Did you mean:

Hi - I don't think any changes were made in Qlik Web Connectors.

Is this for QlikView or Qlik Sense and is it possible you also changed the version of that?

Could you also let us know what table(s) you are using and whether it is a particular input parameter which is making up most of these characters?

Note if it's the 'POST/PATCH/PUT Parameter(s)' one option is to specify this in a file (see tool tip for parameter or help).

We are using the General Web Connector, JsontoTable, using the "Get" method.  The Request URI * gives a pop up error message if the url is greater than 1000 characters after version 2.0.1.  We have a very long Workday url that is greater than 1000 characters and were unable to move forward with any version after that. See error message below.  Note, exact same URL and method work on version 2.0.1 but not after that.

I've been able to "install" version 2.0.1 on new servers by copying a version I had on a different server over to the new server. 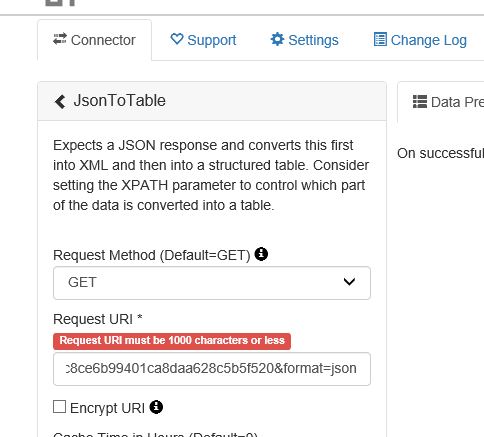 Hi - Could you tell us how long the workday URL just out of interest?

We will look into this issue for the next release.

The query in mention had a URL that was 1,200 characters long.  Thanks for your support!

Any news on that limitation? We are also having issues with the 1000 char limitation as the REST API we are using requires a security token which has more then 1000 char, probably around 1600.