Sometimes you may have a dataset that has garbage in it like in the FirstName field below. 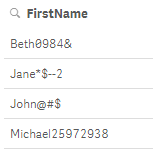 Once I run the script the names look like this:

The KeepChar function works similar except in this function you indicate what characters you would like to keep.  This may be helpful when you have field that includes a mix of numbers and letters but you only want to keep the numbers or the letters.  In this example, I have a ProductCode field that has codes that are made up of numbers and letters but I only want the numeric data.

In my script, I can use the KeepPurge function and use the second parameter to list all the numbers since those are the characters I want to keep in the string.

The end result looks like the image below.  The product codes are now all numeric and the letters have been removed.

Is this available for use with a SQL Server extract?  I can't get it to work.  I get an error message saying "ErrorSource: Microsoft OLE DB Provider for SQL Server, ErrorMsg: 'KeepChar' is not a recognized built-in function name."

I can't find any way of keeping the exact same string value, including all special characters in numbers, in the import.

You are trying to use KeepChar in the SQL-statement but that is sent to the SQL Server and only statements recognized by SQL Server is allowed there as it is the database engine executing that.

Stack a LOAD-statement on top of the SQL-statement and you can use all Qlik-statements in that.

Nice solution and instructions. Does anyone know if QlikView has shorter way of executing in the script the following:

- Remove all numeric from the field (thus keeping only characters)

- Remove all letters/characters from the field (thus keeping only numeric)

It seems like having to type '0123456789' in your script is a little tedious and I haven't found the equivalent for letters. Typing a-z would not be that efficient.

Here you go, copy/paste and change the field name;

Just place your a-z in a variable and use that one in your keepchar().