Decimal Values In Qlik Sense And QlikView - June 2019 and later

Decimal Values In Qlik Sense And QlikView - June 2019 and later

The principle is to store the value as an integer part, called mantissa, and then define the decimal position by an exponent.

Floating-point values are, by definition, not exact values, and the stored value can vary on the last decimal digits. For example, the value 1.75 can be rounded upwards or downwards, but still represent the same decimal value.

The variation on the last decimal digit can occur at any time when the value is being processed. This also includes when a value is loaded and stored, as well as when a calculation or a modification of the value is performed.

The precision of all numerical values in the QIX engine is 15 digits for June 2019 and later.
For earlier releases see Decimal Values In Qlik Sense And QlikView - April 2019 and earlier

This means that the last two (17-15=2) digits of the decimal value are subject to rounding, and the last two digits can therefore fluctuate during processing. For this reason, decimal values should only be presented with max 15 digits, including integer and decimal parts. 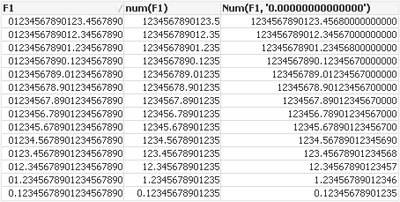 NOTE1: The leading zero in decimal values smaller than 1 is not included in the 15 digit precision.
NOTE2: Values smaller than 100 have more than 15 digits in the decimal part and therefore these values can not be completely revealed.