Average of last 3 values of dimension 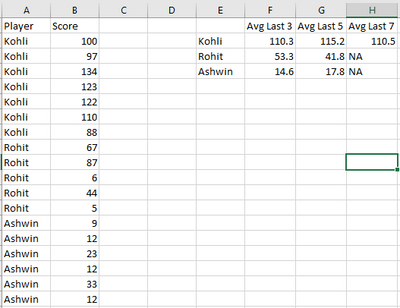 The screenshot above is the scenario that i am, talking about. Any help is appreciated.

try this, Expressions are in header,

can anyone address my issue ?

try this, Expressions are in header,

Thanks for your time to reply to my query. Actually there are two issues with this :

1) the extra column coming for concat(score) , all depends on it . If i cannot get rid of it then how can i hide it ?

2) i wanted some solution in the load script so that there is a resultant table with all this information.

Can you help me with it ?

i have removed extra concat(score) and also eliminate dependency of this column,

i will try get it from script,

as i assured, i have created Load script and pivot Table expression for you,

and Table as below, it has Table expression,

This is an alternative approach to resolve your challenge, taking into account that:

Now with these two new columns, we creae an Averages table calculating the Score Sum when the Player's scores appeared 3, 5 and 7 times; creating a column for each scenario: Sum_Last_3, Sum_Last_5 and Sum_Last_7; We also count the number of times the Seq had been 3, 5 and 7 per player.

Finnaly, We create the Result table, with 3 columns: Avg_L3, Avg_L5 and Avg_L7 using the Last_x columns to tell us when to return 'na' or the Average.

This is the screenshot of the solution:

This is the Load Script of the solution:

I also attached the Z_Avg_Last_3Values_01.qvf file.

Thanks for your reply. How can I do the following here:

Can you help me with it ?

Thanks for your reply but how can i achieve it in the straight table and not in the load script ?