Announcements
NEW webinar Dec. 7th: 2023 Outlook, A Pivotal Year for Data Integration SIGN ME UP!
Options
Turn on suggestions
Auto-suggest helps you quickly narrow down your search results by suggesting possible matches as you type.
Showing results for
Search instead for
Did you mean:

I have a question about setting a variable value with a button.

Then i have created a button with an action of 'Set Variable Value' and entered a value of 999.. 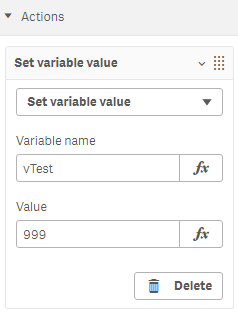 So as you can see, the variable value is 10. When i click the button the values change to 999 (as expected)..

and when i manually change the variable using the input box, the value changes as expected in the above objects..

Does anyone know why this is happening? is it something i'm missing.

I know i shouldn't compare to QV but when setting a variable value using an action on a button (or other object) the physical variable value gets changed in the overview screen.

I need a way for a user to clear out the variable value completely so it's blank with a button.

I know i can set the variable to be blank in the script, but that involves a reload which isn't an option.

Does anyone have any ideas?

see below screenshot.  This will be working fine. 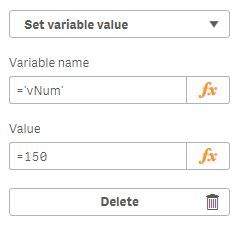 AFAIK, it shows the definiton of the variable, not current value. Although 'Variables' section shows 10, your value still has the value that you typed/selected. Variables section always shows the first value you entered when creating the variable.

The point is that, if you refresh the browser the input value is not stored in the variable. In QlikView, if you save the app, the app stores the new content for that variable.

In Qlik Sense, the new value only works for the app if you keep it open.

I am having the same problem and I still didn't find a way to change and save the variable content from the interface.

If you find something using default QS objects, please, let me know.