Chart with value realised, planned and percentage of realization

I would like to ask if there is a possibility or exists somewhere a chart that could give visualisation that is similar to the one below but with additional information. The chart presented on the picture presents value realised (9,38M) reffering to value planned (15M). I would like to include also a percent of realization of the plan. That means I would like to see three numbers in one chart. It doesn't have to be particularly radar chart. 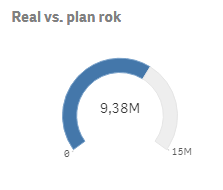 You can try using a mixture of KPI object and Gauge chart Object. Placing the KPI Object below the Gauge Chart object.

This is an option of course, thanks. Although this is the situation I've got now. I wanted to minise the place used by chart by mixing those values in one objoect and in result avoid adding additional one (i.e. KPI).

Have you tried extensions, probably look out in Qlik Market.

I'm not good in searching for qlik market, but I have looked and haven't found anything that could be suitable.

You can try Qlik branch also

Probably someone can help you more.

Essentially what you are looking for is three measures within a single object. Have you heard of widgets in Qlik Sense(https://help.qlik.com/en-US/sense-developer/3.1/Subsystems/Extensions/Content/widgets-introduction.h...) Widgets can be a good way to do that and if you are aware of css/html you can make it appear the way you want. Hope this helps.

It was very helpful hintwith those widgets Rajiv. They are diffiucult for me at the begining but I hope to learn them more. Thanks.