Count Expression to get reflected in Total

I'm trying to write an expression which requires capping the count of certain dimension based on another dimension. the capping is done properly by If equation however the totals aren't calculated properly.

The expression works fine on the level of the Customer (Cust_ID). but in totals the capped calls become inaccurate.

I think you would use AGGR, so something like;

You may need more than just Cust_ID to 'AGGR' over (your FSM/NSM fields maybe ...), but start with above.

Have you tried for your Capped Calls measure change the Totals Function to Sum? 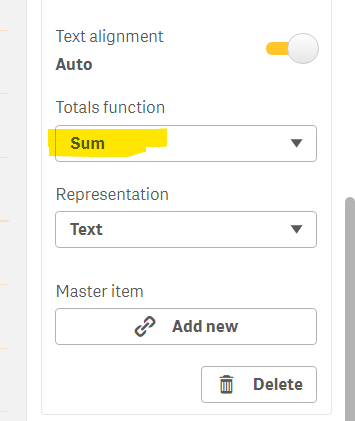 Thanks a lot Chris.

This did the needful in the Tables. Thanks a lot 😊

but is there a way to do the same in other Charts?
for example if I created a Bar Char to calculate number of capped calls for SR login: SR1, the capped calls will be 90 instead of 80.

Shall I add something in the expression to do the capping on the level of each of customer?

thanks a lot in advance.

I think you would use AGGR, so something like;

You may need more than just Cust_ID to 'AGGR' over (your FSM/NSM fields maybe ...), but start with above.

Thanks a lot Chris for your help 🙂 this expression worked perfectly for me.