Announcements
Qlik Users, make your voice heard! Participate in Wisdom of Crowds® Market Study: Start Survey
Options
Turn on suggestions
Auto-suggest helps you quickly narrow down your search results by suggesting possible matches as you type.
Showing results for
Search instead for
Did you mean:

Date and Variable in set analysis

need somebody to hwelp me out. I have a chart and I want to show planned ad archieved turnover based on a project start year. Somehow some projects created turnover before they started. What I want to show is only the figueres created from start date on a yearly base.

It works well for the planned turnover with this:

But it does not work for the archieved turnover:

So what I would like to see is just the years having turnover starting with the year when project was started.

What exactly are you trying to do here? Do you may be just need this?

I have a table with projects and selcted for example 2014 so I will get all projects started in 2014. In my turnover table I found some data before 2014. However I only want to see turnover that was created 2014 or later. The second set analysis works but then I get only figuers for 2014 and not for 2015, 2016,...as mentioned 2014 is my selected value for project start

get an error message with this: 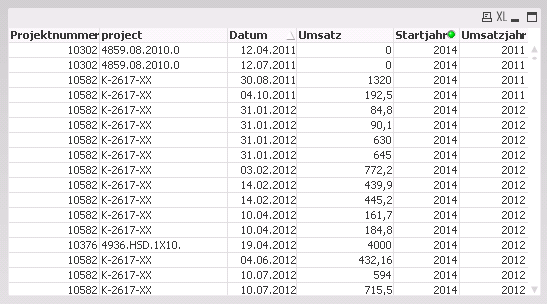 My bad, try this

it works....thank you so much.