Announcements
NEW webinar Dec. 7th: 2023 Outlook, A Pivotal Year for Data Integration SIGN ME UP!
Options
Turn on suggestions
Auto-suggest helps you quickly narrow down your search results by suggesting possible matches as you type.
Showing results for
Search instead for
Did you mean:

Failed to get app becuse there is no app loaded? 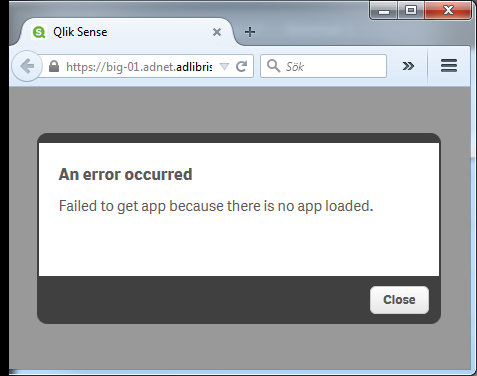 I know experienced on several occasions corrupted apps, and at one time sheets disappearing and now this. Will this be fixed in the next version? Is it a known issues?

The stability of Qlik Sense Server is not good when you loose content you created, and with no build in backup feature or version control you feel a huge uncertainty developing. Manually backing up your apps shouldn't be necassary in an Enterprise product like Qlik Sense Server.

I got some help from our consulting firm. They suggested looking in to the EXIT() function. The problem I have is that I have Qlik Sense 2.1.1 installed on an EC2 instance that we shut down after business hours to save some money. If a reload task is running when the shutdown is taking places that corrupts the file. So we fixed it with a exit script that is referenced from every other script at the beginning of the qvs file.

And this is how you reference it from another script file.

The traces is just to log what's happening at what times. This is because I don't trust Qlik Sense notion of time. All my reload tasked was 1 hour early because day light savings last week and I had to delete the events and create a new for it to work properly.

On other thing is that the IF statement needs to use a number format with a "." as decimal separator, doesn't work if your local number format uses a "," instead.

When I tried to duplicate the app in the QMC i got this error instead. 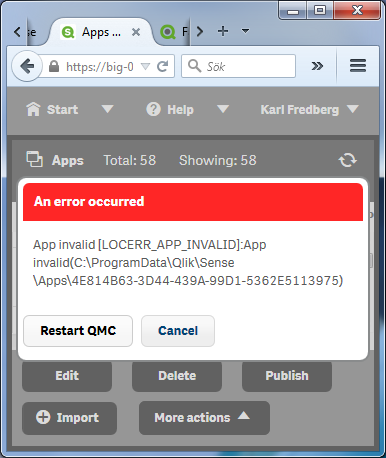 prb
Employee
In response to

any news on that ?

No reply from Qlik on this one?

Not applicable
Author
In response to erikkorme

Nope, but I haven't had it happen again so I guess it was some bug that they fixed in a later version.

erikkorme
Contributor III
In response to

Ok, thanks for the update. We experienced the issue as well, luckily it was an app still in development so no harm done.

Faced with the same issue. How did you handled with it? Will republishing help? Will we lose all our published diagrams?

erikkorme
Contributor III
In response to

We did not find any solution, other than recreating the app. We had a copy in "My work" that was uncorrupted. Unfortunately though, all Community-sheets were unrecoverable.

Did you try re-importing the app?  (Go into the server, find the file for the app, then import it again through QMC)?  In my (very limited) experience it seems like it might have been a database issue rather than a corrupted QVF file.

(I'm not suggesting this is the ideal solution, but I'd be interested if there is a Qlik Sense issue or a database issue - of course I would expect neither!)

Not applicable
Author
In response to quriouss

I tried everything, starting from reimporting, ending with replacing apps in the app folder. Nothing helped.

I tried different versions of Qlik Sense, nothing helped too.