Announcements
Our May 2021 end-to-end product release from Data Integration to Data Analytics is out! READ DETAILS
Options
Turn on suggestions
Auto-suggest helps you quickly narrow down your search results by suggesting possible matches as you type.
Showing results for
Search instead for
Did you mean:

Forecasted revenue from the 3 latest values

I have a table with dates and revenue:

May be using this: 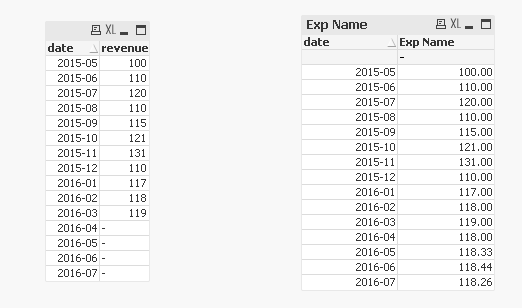 This would have issue when you make selections. Would you be able to elaborate on what this should look like after a selection is made in date field?

Thank you for your answer!

I think I'm almost there but the behavior is weird.

I have now created this following variable that I use as measurement in the line chart as $(vFC):

This however doesn't show any data unless I change it to:

When I load the data with the latter variable definition it shows the data but no forecasted values and here comes the weird part:

Can anyone explain what is going on here??? And more importantly, can anyone solve this and make is work as intended?