The data is stored by transaction date in an Xls sheet, which I have been able to convert to via the Load script to Month, Quarter and Year.  In Qlik View it appears you are able to use variables to achieve this.  How would this problem be approached in Qlik sense.

You can do this using variables in Qlik Sense.  Note variables exist in Qlik Sense you just can interact with them in the UI (yet).  So you can create two variables in the script (vCurrentYear and vLastYear) and then use those to drive you set analysis.  Please see example attached.

You can do this using variables in Qlik Sense.  Note variables exist in Qlik Sense you just can interact with them in the UI (yet).  So you can create two variables in the script (vCurrentYear and vLastYear) and then use those to drive you set analysis.  Please see example attached.

Another way this can be done without variables and without using script in the data load editor, is to use the appropriate expression syntax define within "Measures" under the library. This way these measures can be reused within in the app, without having to define them in each chart object.

("Measures" can also use the variables that are defined in the script within their expressions if needed, which is very useful if you want to make a change to a variable in one location, instead of updating the measure (depending on the calculation). Both very useful and flexible examples of how this can be achieved. Variables make the expression easier to read.)

The syntax used is known as Set Analysis and is a very powerful for calculations.

Here is the example - attached without variables. 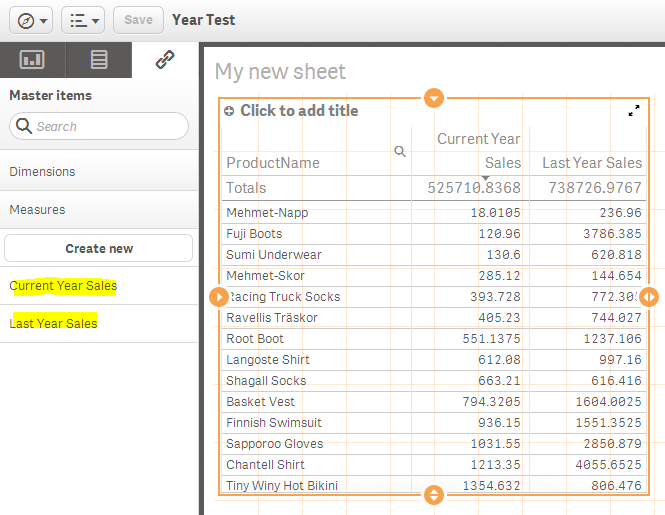 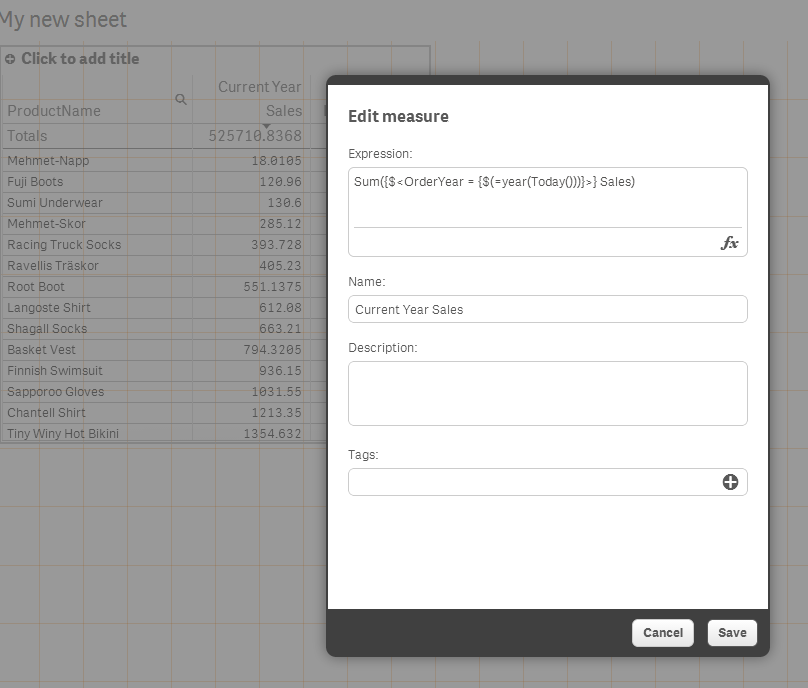 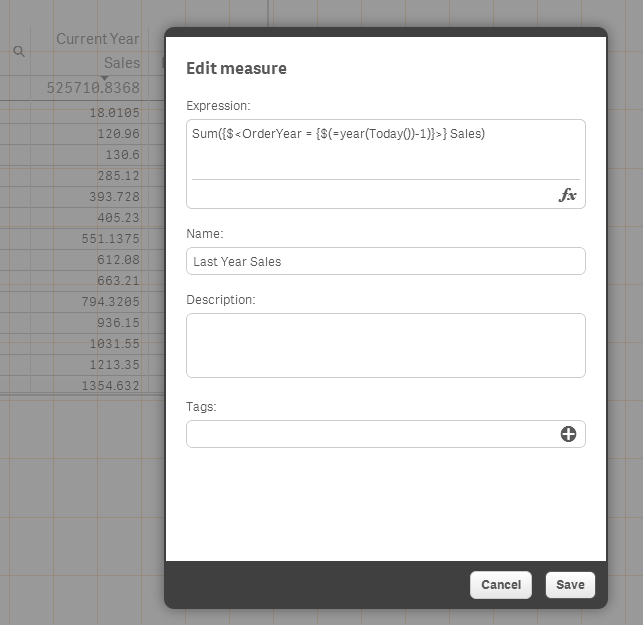 Not applicable
Author
In response to Michael_Tarallo

I'm trying to make it a bit more complex: I do not want the comparison between this year and last year to be static but relative to the Max(Date).

I have also tried to define a variable :

That work if I use it in a text object but not if I place it in the variable.

Your expression needs to be

Double quotes are missing in your expression.

Also, please specify in detail of what you wanted to achieve.

From the above expression, it only calculates the sales for the latest date from the selections.

Please check out for "Set Analysis" in help

Yes, sorry I was just trying to apply the same problem to my case that is not on sales but on balance.

The goal is to have the balance for a particular day. With your expression it work.

Currently I'm using the following in the script:

both in text and table object I get null value as result using $(vBudget).

Like Qlikview I'd use the same variable name in all expression objects.

How can I achieve it with Sense ?

Many thanks in advance.

Not applicable
Author
In response to Michael_Tarallo

Seems like Variables and Measures  are very similar. The main benefit in my eyes is "reuse"

(In fact had you all considered just re-branding Variables as "Measures", so that the "Measures" accordion just became a newer Ctrl+Alt+V? I struggle when features seem duplicative... I need guidance for my team. Seems like this may've been done to imitate a Tableau terminology)

Any other differences, guidance?

Also, I realize I brought "Dimensions" into this confusion, but maybe they are best left alone. Indeed, it seems like they kinda did coalesce with the idea of "Grouped Dimensions" for example, which in Qlikview was managed in a roundabout way; and now has its own "first class" panel on the left.

Finally, seems Measures are sometimes called "Master Measures"? Maybe because they are one of many types of "Master Items" [informally/symbolically known (by me?) as "linked items]. Makes sense.

On the same line, if I have Months defined Horizontally in my data and I need to apply a filter on that , is it possible to do ?

I want to add a filter one for Month and One of Qtr. since the data is Measure, how can I make it dimension to use it as filter? Can you/someone please help?