I've got a new Sense server running 3.2, and I can't find the Local Network option that was there in version 3.1. 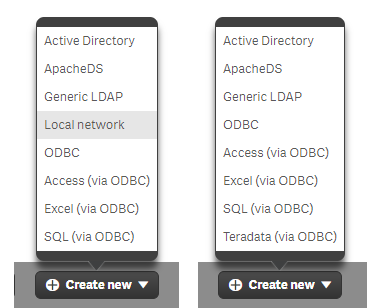 Is it intentional that this has been removed?  The help files for the respective versions reference Local Network or not, as the software does.

Do we need to install all of the AD services onto the server, even for a simple stand-alone environment?

The Local Network option was very useful for cloud machines which could not see any other machine or part of the environment.

What is the recommendation for setting this up in the new environment?

Yes, Even i've updated the same There is no UDC in 3.2. So that, I've raise the ticket to IT Team And they are sending email to partner. Let's wait there response so that we came to know. And i will update you

Before develop something, think If placed (The Right information | To the right people | At the Right time | In the Right place | With the Right context)
530 Views
1 Like
Reply

The Local Network User Directory was available in Service Release 2 . I believe this was not intentional as it is affecting Monitoring Apps, and the problem exists with both Shared Persistence and Synchronised Persistence. Any information to resolve this will be greatly appriciated

I've raised this with support myself now, and this is the documentation that I was pointed towards:

This is as expected. According to changeset QLIK-72081 the local network UDC is considered unstable and lacks attributes like syncing user attributes (group). Due to this and other priorities, this functionality was removed from 3.2.3 and will be expected to be removed from 4.0.0 for users on the 3.0.x track.

This change in UDC options will not hinder the ability of local users from accessing Qlik Sense either through the Hub or QMC, merely the ability to add local users through a UDC ahead of time. When a local user attempts to authenticate into Qlik Sense, there will still be validation of whether this user exists locally and whether the password entered matches the password for the local user.

The route around this not being present in SR3 onwards is not pretty.  When a user hits the site and is authenticated with the local network they are at that point pulled into Sense and you can grant them a token.  Until the point they have logged in though this is not available in QMC - making this a two phase thing.

You could after setting up a user then impersonate them to allow the token to be allocated and the connection tested (which isn't a bad thing anyway, I suppose).

Another approach is to set up a User Access rule, so that the token is allocated when a named user tries to access the site - this is tidier.  In fact, there is merit in this approach also, in that if you set up access rules for ten people and only eight actually then log into the site then the other two tokens are still available.

Note that there is a seven day quarantine period, so a user logging in once and never coming back will tie up one of your licences for some time.

A final approach, if you have a spare token, is to set up a Login Access rule, and have users come in with a login access on their first attempt and then subsequently allocate them a proper token afterwards.

Hope that this helps people out on this topic.

Hello, Steve and everyone.

I am on a Windows Server 2012 with no network connection whatsoever, and no LDAP, Active Directory; just a couple of manually added local users.

Things happen as described. When a new user hits the hub, they are added to the user list in QMC, but even after I allocate a token for him, I still get the "Service did not respond or could not process the request" error.

Refreshing the browser does not help.

I am enclosing my proxy trace log. It mentions something about not being able to acquire the user name from directory services and the LDAP server being unavailable.

Any help will be appreciated!

Giving it some thought, it looks like the hub is looking to authenticate the user, but since there are no directory connections, it can't.

Is there a way to make the hub invoke the same authentication window the QMC uses? Or is precisely this what was considered "unstable" and removed?