Announcements
Join us March 10th, 7 Ways Modern Analytics Can Help You Take Smarter Action. REGISTER NOW
Options
Turn on suggestions
Auto-suggest helps you quickly narrow down your search results by suggesting possible matches as you type.
Showing results for
Search instead for
Did you mean:

publishing an app on Qlik Sense Server (v. 2.1.1), flagging "Replace existing app" and selecting the same published app, breaks up the app thumbnail image, whilst publishing it without replacing, thumbnail shows correctly. Is it a known issue ?

Thanks in advance and have a nice day.

I certainly cannot reproduce it on one of the default apps in Qlik Sense Desktop (Consumer Sales). So mind posting the QVF so I can double check it?

Hi Levi, I'm making some other checks to identify on which conditions the issue happens (because on another similar dashboard I don't have it), I'll let you know asap.

But for sure it's not related on this similar known issue: "If an image file with a filename containing a character that requires URL decoding, for example a space character, is used as an app thumbnail, the image will be broken if the app is exported. The app can be opened in Qlik Sense Desktop where the thumbnail will show as broken, but importing the app to a Qlik Sense server will fail."

That's because my image is like "test.jpg" and issue gets out on republishing app (with overwrite), not importing/exporting it 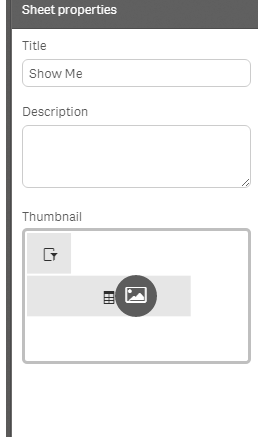 Hi Kevin, I meant the app thumbnail, not sheets one.