I am try use a REST connector, but I have a Proxy Authentication Required, how can I configure the proxy in qlik sense desktop? 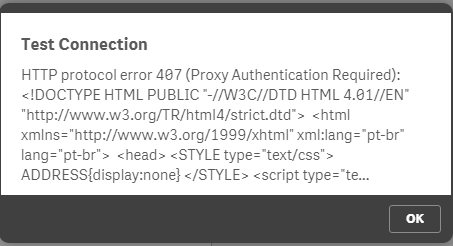 We have the same problem. Did anyone of you find a solution?

So far, no solution has been found.

Until this is resolved, i have found a workaround by using the "General Web Connector" from the "Qlik Web Connector tool". Worked for my JSON issue. (It was solved because in the Qlik Web Connetor tool, it is possible to set the Proxy settings.)

This working for Qlik Sense Desktop? You would pass the link? I don't found for download!

Yes. This connector will work for both Qlikview and Qlik Sense. It's a separate licence and it is not free like the REST connector. Luckily in my case, my customer already had this license...

I attach a informative PDF with more info about the tool.

The connector I use in this set is called "General XML/JSON/SOAP API " - and sometimes also refered to as "General Web Connector". Orginally this was a external tool delivered by a Company called QVSource, that was aquired last year by Qlik and is now sold through Qlik.

I hope the REST connector  will soon allow a Proxy server. Has this been reported to Qlik as a bug?

Thank you for more explanations. Don't I believe that this has been reported to qlik. How I'm a newbie, I do not know where to report.

amien
Specialist
In response to isaiasdd