Announcements
QlikWorld Online 2021, May 10-12: Our Free, Virtual, Global Event REGISTER TODAY
Options
Turn on suggestions
Auto-suggest helps you quickly narrow down your search results by suggesting possible matches as you type.
Showing results for
Search instead for
Did you mean:

Each node of the hierarchy measures a certain value. The father's node value is not necesseraly the sum of it's childs.

for this reason what i would need is to display only the value of the father when I make a selection on it.

Currently I have this situation:

when I make a selection on a node of the tree what happens is this:

the visusalization works correctly, but the data shown takes into consideration the sum of the selected node (wich has already the value i would like to display ) with the value of his children nodes, as you can see in the table on the right there are 3 nodes selected.

This happens probably because the tree is built using as nodes the pivot fields built by the hierarchy function (ex. [Descr device1],  [Descr device2], [Descr device3]...), infact if I use a box filter  using the original dimension [Descr device], this happens:

Only the single node is selected and not the hole tree, thus displaying the data only relative to the single node and not his child. The visualization does not show the children, and it's ok like that.

And hear my question is there a way to obtain the same result of the second situation by selecting directly on the visualization?

Should i probably define the dimension in the visualization if possible something like:

as it is now the levels are defined like this:

What I'm thinking in oreder to solve this problemis:

is there a way or a function like to insert in the dimension of the visualization such as:

I have managed to do exactly what i previously asked using the Depth value generated from the hierarchycal function, for example:

The problem is the visualization is not working anymore because it cannot link the different devices. This way I visualize a column and not the tree. 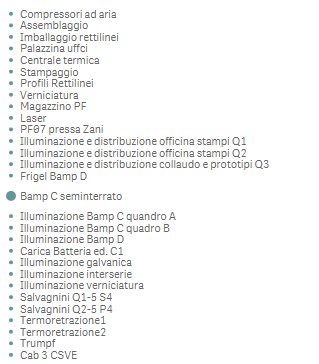