I have an excel file with one column showing the average revenue per month as follows: 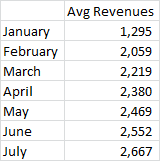 That means that in January the revenue was 1295.

I want to create a bar chart showing the revenue per each month, not the average revenue accumulated. That would mean the following:

Following these formulas the revenue per month would be as follows, and this is the data I want to show in a bar graph: 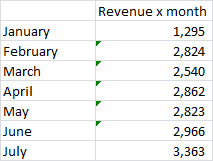 And here the question: do you know what I should write in the expression formula to get these figures ?

Great Tresesco. This is just what I was looking for !!!