Hey guys, I have a Python script that needs to be automated and I tried to do it from Qlik Sense QMC Task Scheduler by running an external program, like this:

But unfortunately the task fails because of "Access Denied": 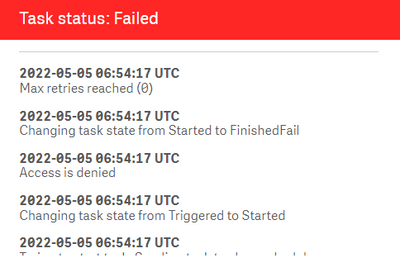 What could be the problem? Is it even possible to run a python script with QMC Task Scheduler?

I tried running the script from several other locations and all of them failed. Including running them from qlik server and admin user folder directories.

Without getting too deep in the weeds here, I'm going to suggest having a look at these articles.

It appears you can use python scripts however these articles might provide the insight you need to execute your specific need and other requirements.

Awesome, I was not aware you can use Execute statements in Load scripts. This is a clear work-around.

But here I'm talking about QMC Task Scheduler "External program task", which was if I'm not mistaken introduced only very recently. I can successfully execute .bat files, but cannot do the same with Python files. I think I might have narrowed down the cause of the problem to user permissions. Perhaps the Qlik user does not have permissions to run Python scripts and that might be the issue, but I'm not sure.