Recently, I was asked to create an application in which a user would be able to search for videos for the demos on demo.qlik.com 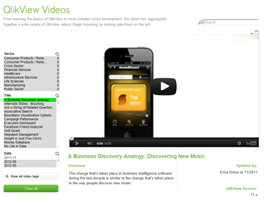 Another aspect of the application was to give the user the ability to select tags in order to filter the data and find the desired video to play. As a team we decided that, because there were so many tags to display, it would be better to show them as a popup over the other objects on the page. The user could invoke this popup by selecting the “View all video tags” button. The user also had the ability to remove the popup from the screen by selecting the close button.  Easy enough, right? All it entailed was creating a couple of variables, a text box and a list box for tags and layer them all accordingly. This was standard QlikView show/hide. Not so fast my friend! Did you know that the webpage viewer takes layer precedence over all other objects on the screen? That’s right; you cannot layer over top of the webpageviewer because of the flash used for the videos. The webpageviewer always comes to the top. OK, so now what? 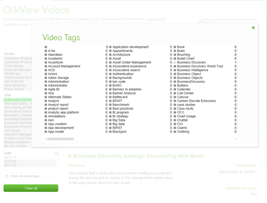 I decided that I needed to somehow put a show/hide condition on the webpageviewer and hide it when the popup was selected. Only one problem, the original webpageviewer did not have an area to write a conditional show expression. ARGH! Well since I sit next to the extension guru, I asked him if he could tweak the extension and give me the ability to show/hide the extension. After a couple of minutes of tweaking, I was in business. I was able to hide the video player when the “View all video tags” button was selected by creating a variable named vShowTags. When the “View all video tags” button is selected, there is an action that sets the vShowTags variable to YES. When that happens, the webpageviewer extension is hidden. And when the user selects to close the popup another action is triggered that sets the vShowTags variable to NO which allows the webpageviewer extension to show on the page.

There are many ways to accomplish desired tasks in QlikView. The challenge is sorting through all of your options until you find the best solution. Click here for the zip file that contains the QVW, Technical Brief and the extension object used in the creation of the Video Player demo. You can also see the Video Player demo on demo.qlik.com Happy Qliking!