Often when creating a QlikView application, you want to add some grouping of a number, and then use this as a dimension in a chart or as a field where you make selections.

Usually, the number in itself is not interesting, but the rough value is interesting as attribute. It could be that you group people into age groups: Children, Adults and Seniors. Or you want to classify shipments to or from your company in how delayed they are: Too early, Just in time or Delayed.

These groups are often called buckets. 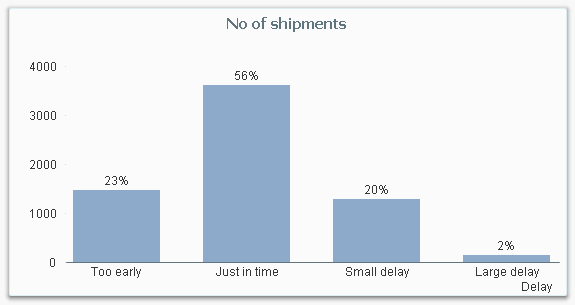 The most straightforward way to create buckets, is to use multiple nested if() functions, e.g:

Or if you use dual values:

However, if you have many classes, the above statements are neither pretty nor manageable. Then it might be better to use a rounding function or the Class() function:

A third option is to use IntervalMatch:

The above three methods all create a field Delay already in the script, and this is what you should do if you have a static definition of the grouping.

However, there are cases where you may want a dynamic definition, and then you need to create a calculated dimension using the Aggr() function. Say, for example, that you want to assess the reliability of your suppliers – but since this is something that varies over time and location, you want to make the classification after you have made the appropriate selections. This you cannot make in the script.

But you should still calculate the necessary static fields in the script, i.e. in this case the delay of a shipment, e.g. by

One way to define the reliability is to measure how many percent of the deliveries that were on time, classified into percent intervals.

In the above chart, the following expression was used as dimension:

The Aggr() function creates an array of values – one value per supplier: For each supplier, the number of “good” shipments are counted and divided by the total number of shipments. The number is rounded to nearest 10% to create the buckets and finally the Num() function formats the number as a percentage.

You can also rank the suppliers and bucket them in quartiles:

In the above chart, the following expression was used as dimension:

By clicking on a bar in either of these charts, you will select the corresponding suppliers.

Bottom line: Create buckets in all cases where a classification helps the user to get a better overview of data.

PS This is my 100th blog post. If you want to read previous posts, click my initials above.

Recipe for an ABC Analysis

yep! This is really good reading.

Also, such a "bucketing" of data is often requested by management to get a quick overview of the state of affairs in a certain respect.

I just realized there is already an RSS_feed available. Great!

Thanks for the post. this is more tactful way to handle bucket scenarios.

). One trap to be careful of dynamic bucketing (although not percentile ones like these) and functions like CLASS is that they can hide empty buckets making them visually misleading. I tend towards using IntervalMatch based buckets as they will show empty buckets (assuming you have turned on 'show zero values').

Labels by Topic
Previous 1 of 22 Next