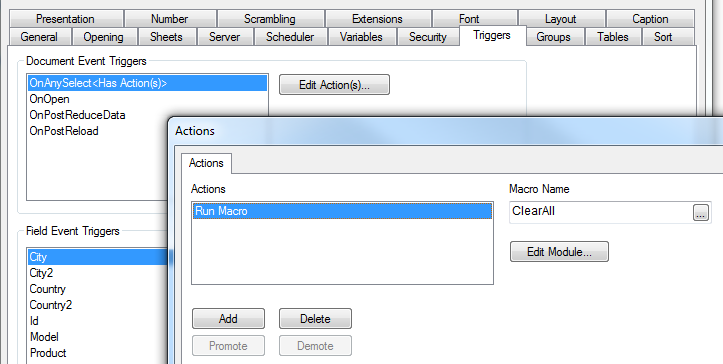 Any chance you could add a msgbox or some other logging to the sub to see if it actually getting invoked when you don't expect it?

A bit of un-useful humor. You said "It is only triggered on an OnInput sequence for an input box.". The closing line of this thread's original blog post (which we may have strayed far from) is:

"Macros are Bad, but Triggers are Worse"

What about exporting data to a custom XML using a macro? in a desktop environment?

If I understand well this is a "safe practice" using macros, is that correct?

Hello Henric,
you wrote: "But if you use the Ajax client, there are severe limitations since the macros now need to run on the server instead of on the client."

So I have a simple question: Are there any macros (not QV Action,...) that are running on AJAX?
Regards

There are many macro methods that work also when launched from the Ajax client, but they are all executed server-side, which sometimes means a potential security problem.

I recently discovered (by accident!) the special script variable "ForceBackEndMacroExecution".

If I set this to 1, will it force all macros executed by a user using IE Plugin to run on the server?  The definitions of 1 (Always execute macros in back end) and 0 (Execute macros in front end for clients that support it) would seem to indicate this would be the effect but I wondered if you knew for sure?

I ask as we recently tested something that cycled through and selected field values in turn. In the AJAX client it worked well but in IE Plugin it was very slow. We concluded the latency was due to having to go back and forth between client and server each time as macros were being executed on the client for plugin and server-side for AJAX. (I hasten to add we didn't want to use a macro at all and have found another way to achieve our goal!)

I have an application in Qlikview which would be run as server application(Not desktop).

The portion that i used macro was regular expression functionality.

As Qlik doesn't support Regular expression and i had several criteria that couldn't implement it with Qlik, I decided to use macro.

But I am using macro in my script not in my user interface.

Should I be worry about using it or activating "running unsafe macro and script" in QMC?