The switch control statement is one of many controls statement that can used to determine the flow of the script.  In Qlik Sense help, it is defined as:

The switch control statement is a script selection construct forcing the script execution to follow different paths, depending on the value of an expression.

The switch control statement can be used in the script to identify a specific execution path.  With the switch control statement, several paths can be defined and a default path can be defined as well when no match is found in the case clause.  The various script paths cannot cross – they should be individual paths that do not overlap.  In the script below, the expression x will be compared to each case.  When there is a match, the script for that case will be executed.

In the example below, Case 1 will be executed – the variable y will be set to Sunday and one record will be generated in the table. 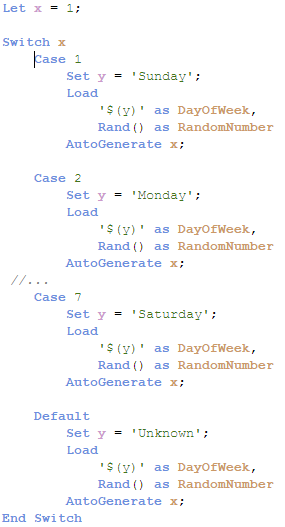 Below is a look at the record generated.

It is also possible to have more than one value for a case, for instance, you can use the script below to run the same script if x matches 1, 2 or 3.

When faced with various script execution paths, try using the switch control statement.  While I rarely have a need to use it, I like how neat and straight-forward the syntax is.  I have attached an example Qlik Sense app with the full script for you to test out for yourself.

Thanks Jennell for showcasing the use case. I understand switch is a control statement. However switch is not replacement of 'nested if' with in a load statement, am I correct?

Labels by Topic
Previous 1 of 24 Next