On this forum you can access and follow the latest updates of our courses and programs with the Qlik Education team.

Join us for the upcoming, hands-on workshops to learn how to build a Qlik Sense application and experience some of the functionality and add on products that will increase data awareness and availability in your company.

You will also learn how to accelerate your ramp up and implementation of Qlik Sense through various Qlik training options...with a special offer at the end of the workshop.  3-hour sessions will be held weekly in multiple time zones.

Space is limited, so register today using below link to secure your spot!

Find a webinar that works for you and register today. 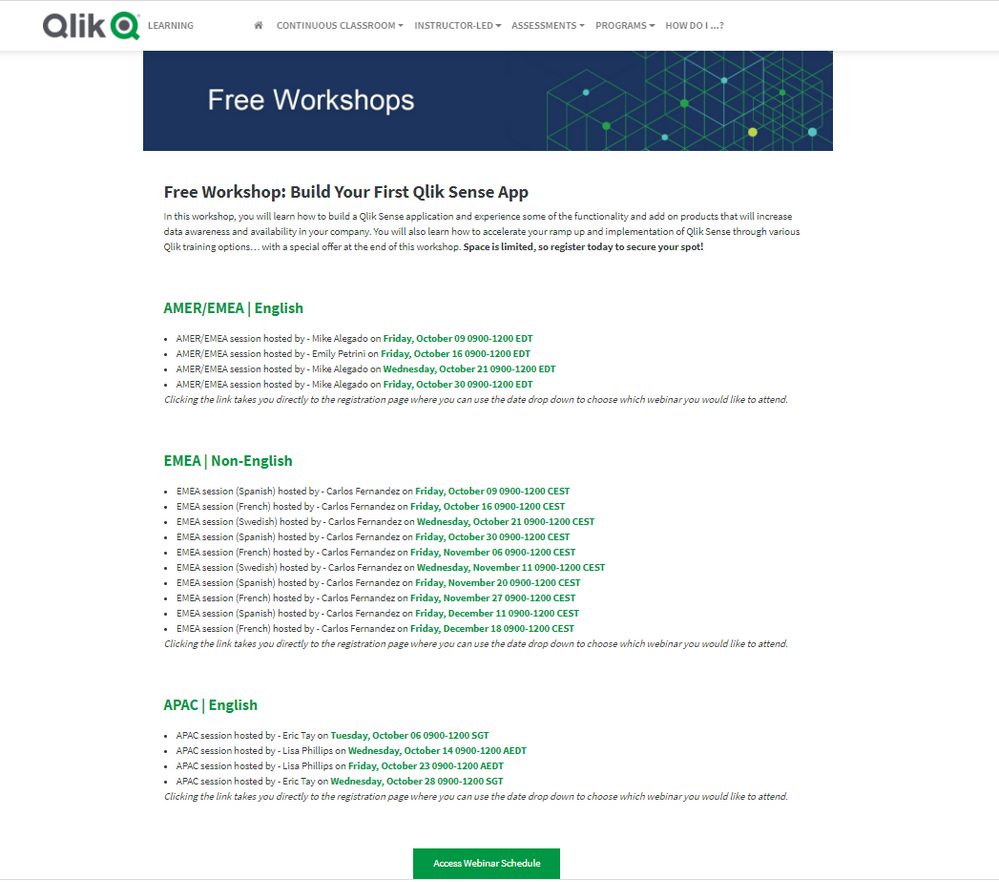 Unfortunately, potential users / prospects in the LATAM region were not considered part of Qlik's AMER region for these purposes (yes, there are sessions in Spanish in the EMEA region, but not in Portuguese).

Also, considering the options of having free access to PBI and other tools, some people might think twice about participating in a webinar to learn about a product that can not be used after 30 days unless one has a paid license for it - specially considering that we are in the middle of a global pandemic that is affecting the income of many people across the globe.

In light of my previous comment, and for what it might be worth given the topics treated in this forum, hiding access to QSD to people who can not pay a subscription at this point in time doesn't look like a great idea to me.  Perhaps Qlik's leadership team should reconsider making QSD freely available again to the general public, or not hiding the means of accessing it as much as Qlik does today, and just limit the maximum load of records per app to 50-100K for sessions that are not authenticated against a QSE server.

this is awesome, thanks for sharing this with the community!

Thank you for your feedback @jdiaz  Please see our updated list of workshops that will work for LATAM time-zone. https://learning.qlik.com/course/view.php?id=1650

Thank you for the update @Bilge_Kara !

any chance a session or two were recorded?

These sessions are not recorded.  We encourage to register for another event by visiting our Free Workshops page on the Qlik Learning Portal.

As a note, due to high demand; we are planning to schedule more workshops in Q1 2021.