Announcements
Talk to Experts Tuesday, January 26th at 10AM EST: Qlik Sense. REGISTER NOW
Options
Turn on suggestions
Auto-suggest helps you quickly narrow down your search results by suggesting possible matches as you type.
Showing results for
Search instead for
Did you mean:

I spotted some strange scroll behaviour whilst on a client site.  Rows seemed to be duplicated in a table, even though the values in the dimension were distinct.  The values attached to the duplicated rows were also duplicated, but the total looked fine.  On exporting to Excel, no duplicates existed and all looked well.

To replicate this issue you can run this very simple load script to get some data:

and then, once the data is loaded create a sheet and then a Table object.  Into this drop the only dimension.

Drag the table so that only the first five or six numbers are visible, and then scroll.

Initially the scroll bar seems the right size, but on scrolling down it halves in size and duplicate rows appear.  You can see when the table is sorted the point at which the numbers duplicate here: 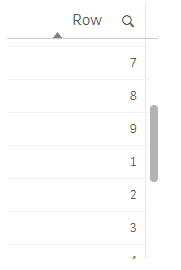 Behaviour is not entirely consistent, and can change on a reload or resize of the table.  The point at which the values repeat shifts (here you can see it is at 9, I've seen it at 10 and 7 also).

Does anyone know what is going on here, and whether there is a way to fix it?  mto jgd  I feel very uncomfortable handing over apps where this is happening.

I have tried to replicate this with QlikSense Desktop 3.1 but however much I fiddle with it I cannot replicate the duplication issue.  The scroll bar does change in size but no duplicates appear.

Maybe I just don't have the Midas touch.

Attached is the qvf I have been using.  Can you see if you can break it ?

i just tried to recreate the behavior on this platforms

and in all of those platforms i couldn't recreate the behavior , every thing seems to work fine

Just dropped that into my Sense Desktop, and it breaks.

I've tried different browsers, so I guess there is some other component on my machine that is spanning browsers.

Hopefully it doesn't affect too many people then - hopefully just me!

I will try on another machine in a bit...

..... but just tried it with the Chrome Browser via the Web Hub on my local laptop and it only scrolls down to number 8 when it should go down to 10.

Then if I add a Filter Pane on the field it then goes down to 9 in the Table, whilst the Filter pane goes down to 10.

And if a select a value and then deselect it, then all is ok.

BUT.......  when I repeated this the table only went down to 6 initially, so as you said it is not inconsistent.

Although I have not managed to see any duplicates yet though.

Sound like one for Qlik Support.  They enjoy the infamous random intermittents.

FYI, I've posted on the same issue (Scrolling bug).  The report include a reproducable (for me) case.

Not applicable
In response to stevedark

I am also facing a similar issue.  And this happens randomly and seems to be related to scrolling.

I have a customer who just reported similar bug. He is using a "touch device".

This bug (same behavior on touch device) was reported to Qlik R&D and is already fix. A solution is expected in coming release.

did you find any solution?