I am trying to establish a connection to a website to pull in table data. The data spans several pages (displays 50 records at a time). The site uses a paramaterized URL so you can control the records displayed via the URL. Ideally I can have one web file connection that can loop through the pages itself. The only solution I have been able to come up with so far is to create a new web file connection for each parameterized URL, which is definitely not an elegant solution.

I solved this using one Web File. Here's a sample you can try.

Thanks for the sample code. I managed to get it to pseudo-work. I had to setup a web file connector and use the Lib:// rather than http://. This method with your code modified to fit my scenario did have the data load 'paging' sort-of. With this in place it would loop through the FOR EACH function for all the parameters passed to the variable and bring in a table of data. However, it was not actually paging through the URLs. Instead I would continually load the first page and add that to the table. So what I ended up with was a table of the first 50 records repeated x times (x being the number of parameter passed to the variable in the FOR EACH clause).

To ensure the variable contained the correct value I added the variable to the table. The result showed that the FOR EACH clause was definitely looping through the parameters but for whatever reason the resultant URL would only load the first page over and over.

Here is the code I am using (the text is pasted below if needed); 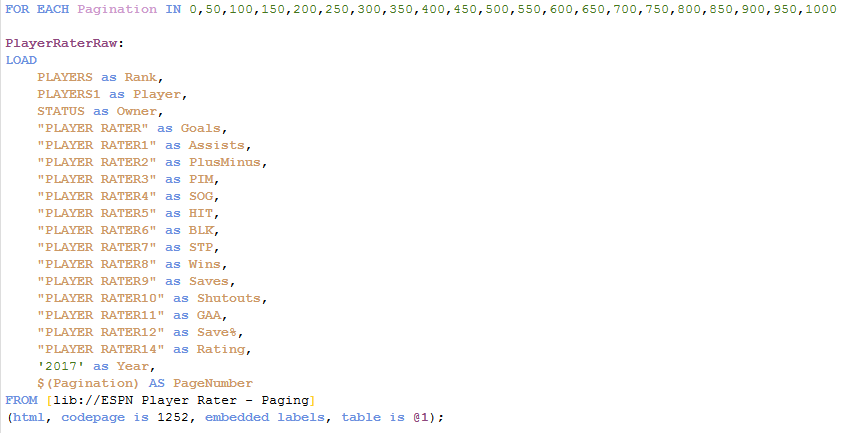 With this code what I end up with is a list of the first 50 players repeated 21 times. Any thoughts?

Note: I tried adding single quotes around the variable parameters and that did not make any difference.

Nice to hear news from you. I have two small advices to you:

1. You can change the line FROM THIS:

You don't need exactly a connection webfile created for retrieving data. You can do it directly.

2. You have to store each result set into a QVD file. Otherwise, only the last result will be all your data.

To store the results, you must create a Folder Connection

Afterwards, you can load the data on your application using the QVD and the results will be like:

I've prepared an app for helping you with the functional code.

I hope this can help!

"Choose a job you love, and you will never have to work a day in your life."

Thank Marcos, I appreciate you taking the time to develop that sample app. I downloaded it and imported the qvf into our Qlik Sense instance. However, when I try to run 'Load Data' I get an error;

This statement only works with lib:// paths in this script mode

If I understand this correctly it is saying that I can't define a connection directly to a URL, but rather I must use the lib:// action. My only guess here is that the behaviour in Qlik Sense is more limited than in QlikView regarding data connections. Unless I am missing something else completely.

this occurs for security reasons. You can store the qvd in a folder and create a folder connection for read it. Otherwise you can disable the Standard Mode, but don't forget about uncle Ben adive: "With great power comes great responsibility."

There's a link about standard mode.