Is it possible to create in sense a task that runs several times (hourly, every x minutes, etc) between specific hours?

This option was available in qlikview publisher triggers (for example when we select Hourly, this option would appear "Run only between [...] and [...])

You need to set the Start Date and the End Date and the type of Schedule you require which is available in QlikSense QMC..Screen short attached below 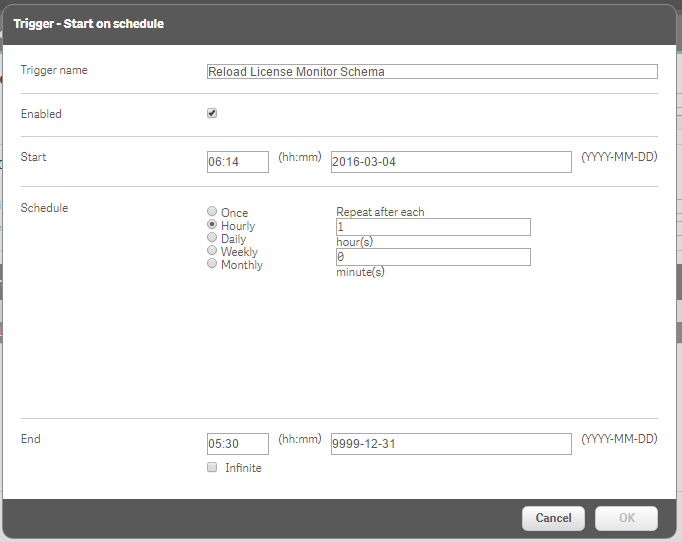 Thanks Karthik, I know...there should be a kind of confussion as I wasn't the one doing the initial question, I was trying to help JP.

Hello, I have similar need.

Could you find any method?

anyone found a solution with latest versions of QS (September/November 2017)?

In Sense this is not possible to do using the UI.

If you are only have a moderate number of times you want to trigger it every day then you can work around this problem by creating a separate trigger for each such occasion and space the start times say 15 minutes apart.

If you can't use that solution then there is an API endpoint for starting tasks mentioned above and you can use e.g. cron+curl to call it according to your own schedule.

I know this is an old question, but I don't see any clear solution given, so here goes...

I had a requirement to have an app load on a short cycle (5mins) within normal business hours, and no point loading outside of those hours (because the app takes 4mins to load it would be very "expensive" to have it load at times that don't matter).

I used two apps to make this happen:

App 2: will schedule based on App 1 completing successfully.

Here is reference code for App 1:

CGilQlik
Contributor II
In response to pjaredchurch
Hello everyone!
We used the same approach for a similar request and it worked fine.
It would be great to have this option in the triggers, like in monthly or weekly options that let you select individual values.
735 Views
0 Likes
Reply
Highlighted

Great solution, thank you for this!

I am using windows scheduler to trigger a powershell script that runs a QlikSense task through the API.

The benefit of doing it this way is that I don't get log files filled up with task failures that are intentional.