If you use a windows a Active Directory UDC to import and manage users in Qlik Sense, then among other things , Qlik Sense will store the windows UserID, User Name, Directory, AD group memberships, and email address of the users inside the Qlik Sense repository. Usually the important 'domain account' of a user in NPrinting is nothing more than the Directory\UserID drawn from Qlik Sense.   Since NPrinting requires just a few more attributes of the user (default locale , timezone and a generic password which can be hard coded to default values or loaded from another source like a database or spreadsheet) , the Qlik Sense repository can be used as an effective source of users to import into NPrinting. It works especially well when the NP users are already QLIK users which occurs with on-demand use cases.

The Qlik Sense repository is accessible through the QRS REST API and the users + user attributes (including emails and groups) can be read directly through the Qlik Sense REST Connector inside the data load editor.  You can author a new REST connection or you can simply use the built in "monitor_apps_REST_user"  data connection that is setup automatically when you first install Qlik Sense.  Just note that this connection is used by the default monitoring apps and is configured by default to work only on a central node .  You need to reconfigure the data connection to work in a multinode qlik sense environment

So what happens once you can read the users + attributes into a Qlik Sense load script ?

Well,  you can then use Gianluca's wonderful reference document How to use Qlik NPrinting APIs inside a Qlik Sense load script  and the attached sample to inject the same users through the same REST Connector and a data connection that points this time to the NPrinting API to create / update / delete  or in short, manage, your users in NPrinting.

Please note the 2nd half of this technique can be applied with ANY accessible Qlik source to load users into NPrinting.

Now although the technique involves script, the benefits is that the syncing can be done by simply scheduling a Qlk Sense Task and/or chaining upon success/failure of another Qlik Sense task.  So you get to operate Qlik/NPrinting through a single scheduler.

Another benefit is that using this and other reference methods you can unlock the REST API without being a REST developer because you re-use Qlik load script techniques using the out of box Qlik Sense, NPrinting and REST Connector products/components.  This untaps more automation in how you operate NPrinting with Qlik Sense and can provide more nuance than a standard featurized solution .

The technique is dependent on the foundational approach outlined in this post  https://community.qlik.com/thread/292037  . 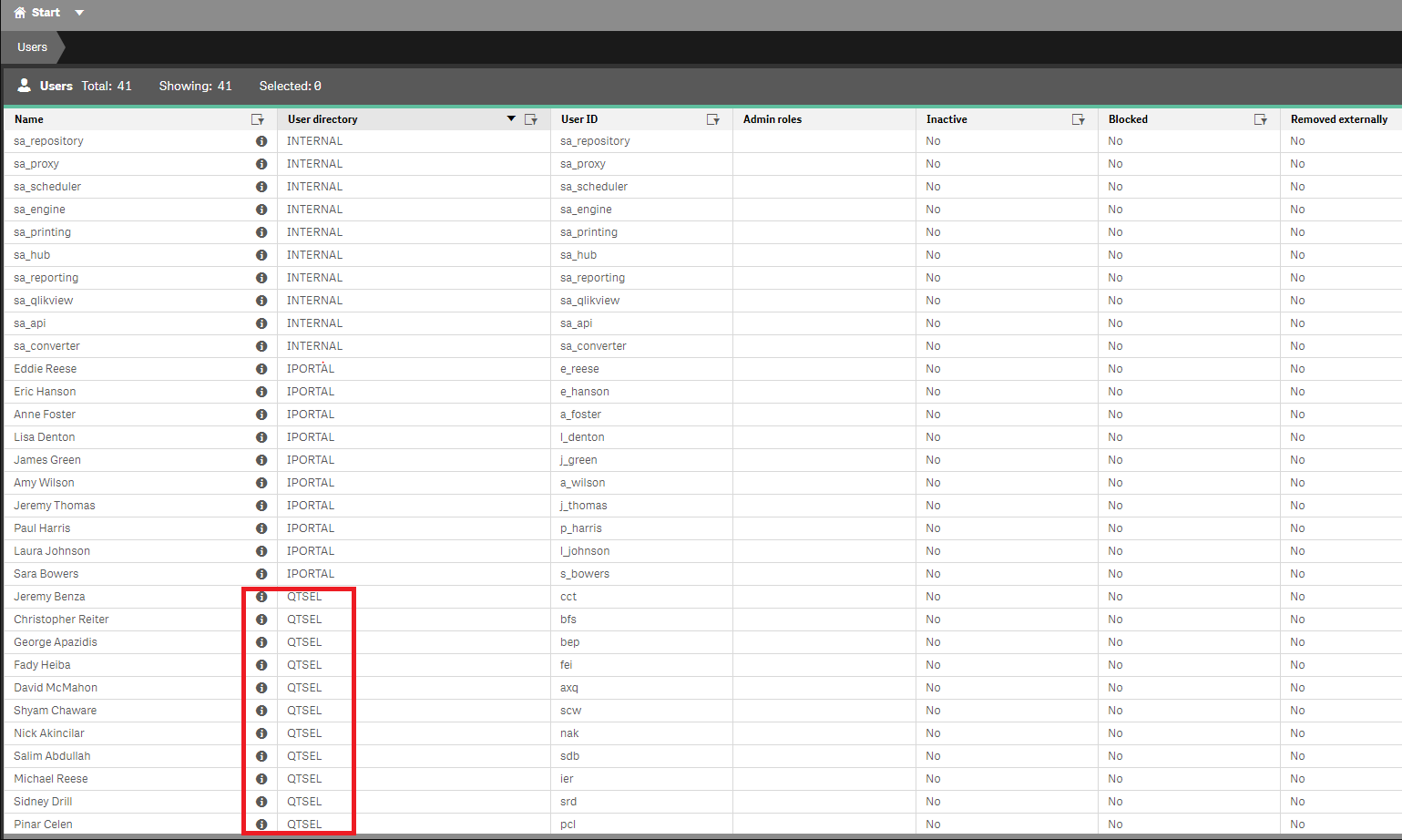 The above solution will sync USERS from Qlik Sense to NPrinting.  A logical enhancement would be to sync GROUP memberships from Qlik Sense.  In NPrinting,  'groups' are just recipient groups that bucket recepients together for report delivery whereas

'security roles' define which capabilities and content the recipients can see. So .. .when you sync groups you could sync them to groups memberships or role memberships depending how/if you may want to leverage existing AD group memberships.

Another enhancement would be to sync and update user filters.  THis is also readily possible by loading the necessary data tables and data values into the QLik Sense app so they can be associated to users and prepped for update into the NPrinting API.

Nice one! I can see that it offers more flexibility rather than the new LDAP import, e.g. Admin groups and similar. Or have you found a way to do that in the new import tool?

I put together this slide to help show the flow of what you can sync from LDAP, what needs to be done with the console (roles) and what you might use to keep track of user filters if necessary 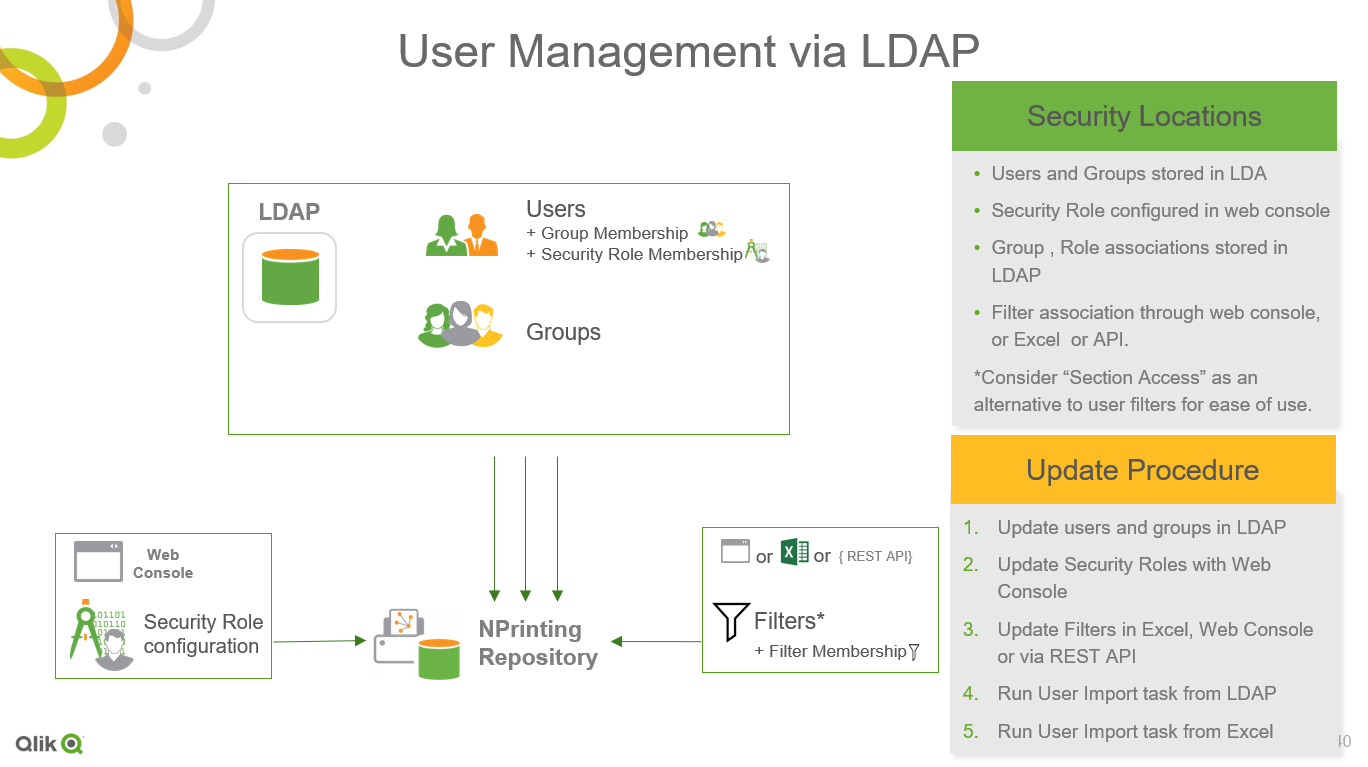 So as long as we create the roles beforehand, and use the same value for the role in the import, it should work, eh?

thats right.  works like that across the board for import tasks using LDAP or Excel. It also works via the API with or without the nifty load script/rest connector technique in this original post.