In Qlik Sense the QMC is used to administer content and perform certain administrative actions.  In many cases you may wish to allow a user self administer the content from a group of users (such as their department) without having access to the whole QMC or all the content.

This document outlines how to set up a “Team Admin” role in the QMC. The target is:

To prevent having to create too many rules an approach needs to be identified to make the security rules generic.  The aim here is to make it so that you can have several admins for the same team, an admin for several teams or several admins each for their own team without having to keep maintaining rules or settings.  There are several ways to do this but using Custom Properties is likely to be the most efficient in many cases and this is used in the examples below.

Identifying which published apps can be administered is simple (its just picking the right streams) but selecting apps which are not published means identifying a attribute for the user that owns the app and to pick something that avoids too much management.  In this example a group will be used – this could be a group from active directory/LDAP etc.

Note: These instructions contain the use of a feature that was added in Qlik Sense 2.1.1, the rules are still valid for prior versions however the ability to add multiple values to custom properties allows for less complex rules and easier management.

How to implement it

Custom properties will be used to identify which content the user can administer. You will apply a custom property to a stream and to the user and these will need to match.

Now you have created these, apply the values to the users and streams.  To do this edit the Steam, select custom properties and apply the department value as needed and repeat for the user you want to be the team admin by setting the TeamAdminFor setting.  You can use multiple values in these lists too so you could make one user the admin for several departments (only with Sense 2.1.1 and above).

In this section you will create the rules to give the user access, it’s a good idea to test after each rule to make sure it is working as expected.    To keep the rules easier to read there are 4 rules created, one to define the sections visible in the QMC, one to define what the user can read, one for create and one for edit.

This rule dictates which elements in the QMC can be seen, it gives no access to any actual data.

Test this rule and you should now see any user with the TeamAdminFor set can see some, but not all sections in the QMC but wont see much data (probably will see the same apps they see in the hub).

2 - What the user can create

This rule dictates what the user can create

This rule will dictate the entries the user can see listed in each of the QMC sections. Remember the aim in this example is to allow the team admin to see any published apps in the streams they look after AND any apps created by users in a specific group.

This rule will dictate the entries the user can edit (edit,publish,delete etc) in each of the QMC sections. Remember the aim in this example is to allow the team admin to administer any published apps in the streams they look after AND any apps created by users in a specific group.

After this rule the team admin should now be able to edit, delete, publish and change owner, etc on apps.

Note the user may see apps in the QMC that they cannot perform the admin actions on, this is because they may have been given access to read apps in the hub and these will display in the QMC – however these will be read only.

This was very helpful. I would like to add something as it may be a pain point for others. After I implemented the rules, unfortunately the triggers were not exposed for the tasks for the team admins. In order to open up the task triggers in the QMC, I had to add the following to the end of the Resource Filter of the TeamAdmin_QMCsections security rule: , SchemaEvent_*. Hope this helps!

I have a problem when I wish that User TeamAdmin whant to Publish and replace another application in the Stream, he don't have the rigths can you have an idea ?

I am facing a problem that while a department admin trying to publish an app, only 'Everyone' stream is coming in the drop down. How could we get all Streams applicable for this user in this drop down . 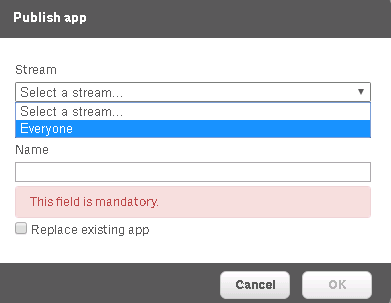 When I implement this, I'm having issues changing the application owner.  I'm able to delete the existing owner, however I don't get the drop down list of users, and if I free type the owner, I get the red error box saying "This is not a valid value".

I have an error when creating the reload task 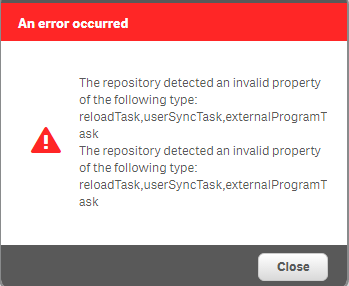 Any one have idea on this error?

I've got the same issue as yourself. The ContentAdmins can't change the ownership of an App currently. Have you figured out what's causing this?

I have same issue. I do see only everyone stream. How can I see other streams. ?

For the stream to be available in the selection list this example worked for me, combined with QMC access rights as explained above:

I hope it helps you too.

Hello- We implemented these security rules in our Qlik Sense environment and it was working fine until the June 2017 upgrade, since then it is extremely slow for some users, and for others it returns an error message stating "The 'GetCount' operation failed". Is anyone using this in the June 2017 release?

Can you explain how this concept could be implemented using AD groups instead of or in conjunction with Custom Properties?