Problem with assigning a numberic ID to YearWeek using AutoNumber()

I am trying to assign each of the YearWeek a new numeric ID using the Autonumber() function in the script, as shown below:

After I created a temporary table box with the YearWeekID and YearWeek field to test whether the script is working as expect. However to my surprise I got the following result: 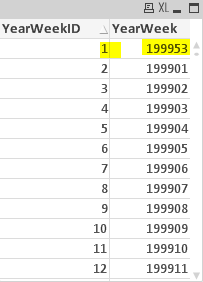 Shouldn't the calender be populated in ascending order in such a way that each new YearWeek will have a YearWeekID value that is the consecutive to its previous period?

Any help would be appricated

Not unless your source data is sorted correctly already or you force that sorting in a resident load with an Order By clause.

Not unless your source data is sorted correctly already or you force that sorting in a resident load with an Order By clause.

Autonumber does not sort the data, it increments the autonumber when a new value is encountered in load order. Sorting the data before the autonumber will ensure that it is numbered in order.

Logic will get you from a to b. Imagination will take you everywhere. - A Einstein
180 Views
0 Likes
Reply

Thanks guys that was really helpful. I made use of a resident table in order to sort the master calendar data before using the autonumber function!