Announcements
QlikWorld 2022, LIVE in Denver CO., May 16-19, 2022. REGISTER NOW TO RECEIVE EARLY BIRD PRICING
Options
Turn on suggestions
Auto-suggest helps you quickly narrow down your search results by suggesting possible matches as you type.
Showing results for
Search instead for
Did you mean:

Reducing the load time of a big table

I have a Straight Table containing 600.000+ lines. The effect is loading this takes a while, and the application is unresponsive in the meantime.

Is there some way to partially load this and tell Qlikview to load the entire table upon explicit request only.

For example, load the first 100 lines, then use a button to start loading the remaining 600k+. I am explicitly looking for a solution to this problem in the front end (is possible), not in the load script.

Thanks a bunch for your help and suggestions.

Eventually how I solved this case is by adding duplicate expressions, making both conditional. The first expression contains a set analysis for a certain period only. With a button users can switch to the other expressions which loads and shows data for all periods.

I don't think there is a feature like this in QV.

Maybe you can use the show / hide condition and create two charts, first chart visible from the beginning, only showing limited data, second showing all data, but hidden first and then showed after clicking a button.

This needs to be done in the load script, its not an option in the front-end.

The best approach is to use an incremental load to just load the transactions that have changed since the last load, and load the unchanged data from QVD files.

Also do you need to load all the columns? Reducing the width of the data being loaded can improve reload performance.

If loading from SQL it is better to just select the columns you require in the SQL script,rather than using "select *" to get all columns and then excluding columns on the QlikView side of the script.

You may also want to look into 'direct discovery':

Not sure about the performance. may be if (RowNo(TOTAL)<=100, YourExpression) ?

Create a Button & Variable. -> Assign the value in Button Action.

Henk,  why not limit the dimension, without others, with a variable?

one solution could be: 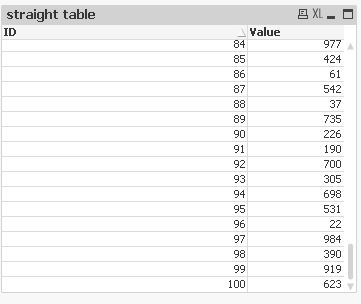 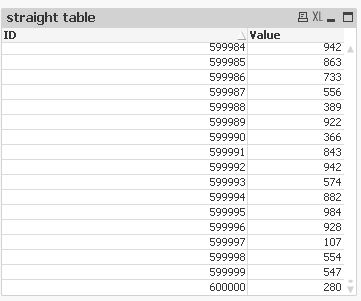 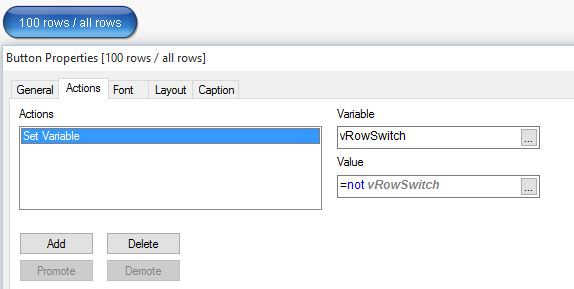 Not applicable
Author
In response to swuehl

This one I considered already. Thanks!

Not applicable
Author
In response to Colin-Albert

Thanks for your suggestion. The columns and amount of rows are a given, no flexibility there at the moment. Incremental load wouldn't help, because it takes so long to render the entire table (because of so many rows), not to load the data.