I have a problem when viewing documents containing a background image that has been created on a machine with a different graphics card to the one on my HP 8560 workstation. The 8560W uses the NVidea Quadro 1000M graphics card. I have updated the drivers with no change to this problem.

This scaling issue can be seen by opening the "Whats New in V11" example document,  and selecting the Reports tab. When I open the Reports tab on my laptop, the grey background box behind the charts does not scale correctly as shown in the screen shot below. The grey background image is incorrectly sized, the right edge appears between Jul and Aug on the Month List box, it should be sized to be beyond Dec.

I work as part of a team who develop solutions in QlikView and the apps may be updated by various users who have different machines, so this does cause a problem on documents where we use background images and need to share work on the apps.

I have support case open with QlikView on this but they do not have any HP laptops that replicate this issue. I have been able to replicate this across several versions of the HP workstation range 8560W and 8530P.

It would be helpful if the Community can test whether they have this problem by opening the report sheet of the standard "Whats New in QlikView 11" document. You do not need to create your own document to test this, or to have access to different machines.

If you do see the incorrect scaling, as shown in my first screenshot, please can you post the details of the model of your machine and the graphics card & driver, especially if it is a different model to the HP 8560. The version and build no of your QlikView client would also help. I still see the issue on 11.2 SR3 build 12129 the lasted version.

I do not need details of machines that show the background correctly, just those that have this problem.

Thanks Carlos, The display setting is the cause of the different background scaling.

I have passed these details to the support team at QlikView to update the bug that is logged for this. I have been able to confirm this issue on both Win 7 and Win 8.1

Apparently there is some disconnect between zooming of the sheet objects and background image.  Did you check what is the background image setting in the Document Properties?  I have Image Formatting set to "No Stretch".  Getting something like you if change to "Keep Aspect" and after that use "Fit Zoom to Window".

Thanks for the feedback.

I am seeing the resizing error with the default setting on the "WhatsNew" document. The sheet properties image formatting is set to "No Stretch" .

You are right that the zooming of the background image appears to be disconnected from the rest of the application.

Perhaps you have already discarded the screen zoom issue, if not you may find this discussion useful:

Thanks Carlos, The display setting is the cause of the different background scaling.

I have passed these details to the support team at QlikView to update the bug that is logged for this. I have been able to confirm this issue on both Win 7 and Win 8.1

I know that this is a very old post, but my co-worker and I are currently having this problem. We are running two different models of HPs with two different graphics cards. She sees the "Reports" tab all jumbled and I see it lined up. This is making sharing documents very difficult. I couldn't tell from the post above: Is there anything that we can do to fix the problem on our end? Or was it just a bug that Qlik was supposed to be fixing?

Thanks for any info you can provide!

Qlik could not resolve this issue, though I tried several webex sessions going through various options with the development team. The incident has been closed (00119272).

The best solution I had was to set the background scaling of my machine to 100% not the HP default of 125%.   Just get a magnifying glass as the text then becomes small 🙂

I have had this problem across 3 different HP workstations!  The problem is only apparent when sharing apps with users who have a different setting for their screen scaling. 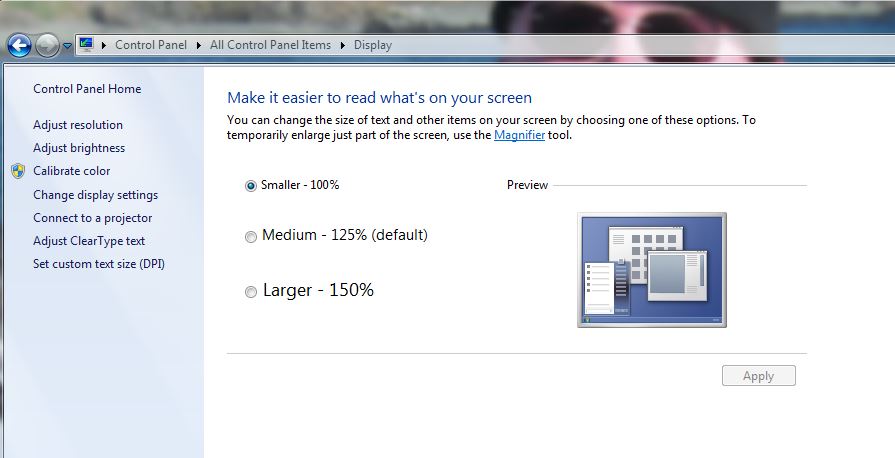 Thanks so much for the quick response. This will save us much time researching.