Where is the whisker pie chart extension?

Can someone confirm this?

Or am I missing something / is it stored elsewhere / can it be found elsewhere?

Please mark the post as a solution if it provided you with a solution to the topic at hand. Thanks!
3,606 Views
1 Like
Reply
10 Replies

You need to go there  Examples\Extensions\Extension Examples.qar  doubble click on this will install extensions

Please refer link for the same

Re: Qlikview extension on server

Re: Enabling Extensions on server

Hope this resolve your issue.
If the issue is solved please mark the answer with Accept as Solution.
If you want to go quickly, go alone. If you want to go far, go together.
710 Views
0 Likes
Reply

I know - but when I install the Examples\Extensions\Extension Examples.qar (that is installed as part of the QV desktop client), no whisker charts are installed.

That .qar file is really just a zip file with a different extension.

Renaming it to zip and extracting the files in it, it is pretty clear that there is no whisker extension in there.

Taking the QAR file (I have no idea what QV version this one come from) referenced to in Re: Qlikview extension on server

the included extensions are (taking the names from the director names they are stored in):

So - there are mentions of the whisker pie chart being available as part of the example QAR file - but where is it??

Please mark the post as a solution if it provided you with a solution to the topic at hand. Thanks!
710 Views
1 Like
Reply

I've seen this chart as a part of others charts (eg. StraightTable), when you define the representation of a expression as Mini Chart

Have you been able to find out how to use the whisker chart? I am trying without success...

You are right and that extension is not available within the recent releases, anyway here is the .qar so you can use it, I hope it helps.

Thanks for uploading that Juan. Unfortunately, it didn't work for me. I got a javascript error as soon as I started creating an object. I was able to install it okay and I see all the extension files. I'm running 11.20 SR5. Any idea why they would have removed that from the installation package? Seems bizarre.

Anyone else have another copy they could offer? I can't find it anywhere on the web.

Not applicable
In response to phersan_sme

I'm using this extension and everything seems ok (QV 11.2 SR6) maybe we can analyze the javascricpt error, could you send the image?, maybe we can turn this around (Attached the screenshot of the usage right now of the extension)

Agree with Paulo re: bizarre to remove it from package. 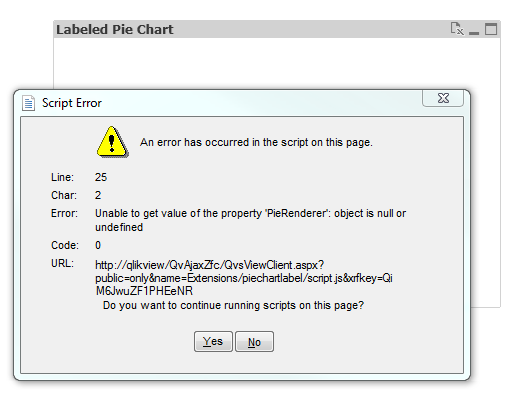 This is the first error; because it tries to locate scripts (*.js) at '...&name=Extensions/QlikView/Examples/piechartlabel/*.js'

Another error after I fixed the above, because it tries to AddExtension pointing at:

And I suspected the same failure to load the styles (*.css files) as scripts;

So basically I removed 'Qlikview/Examples/' everywhere from the Script.js file

Please see attached for a new extension that should install fine.

I should modify to check for jquery, first... Let me know if anyone's getting new errors, like the one I got below. 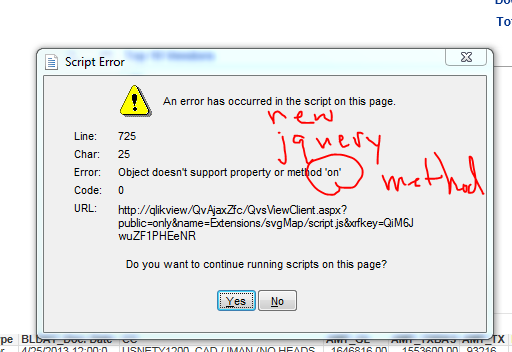