I have an inventory table in Excel with the columns "ComputerNo.", "CPU", "Storage" and "USB". It is loaded as a flat table (crosstable load) into my QlikView data model: 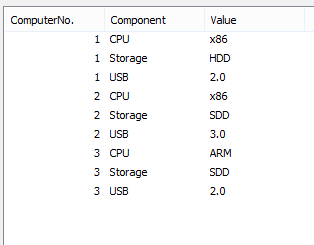 My question: How can the user filter that pivot table, such that, let's say only the rows of those Computers remain which have "x86" as CPU and "SDD" as Storage?   --> satisfied by ComputerNo. "2"

My Problem is, that I need to select those values of field "ComputerNo." which "have" a record in my QlikView data model for each desired Component-Value-combinations.

I played with the advanced search on field "ComputerNo." but was not able to filter it by multiple Component-Value-combinations. 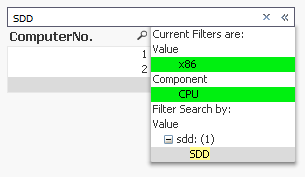 Anyone has an idea? Thank you in advance!

There are several solutions. I think the generic load probably best fits your problem. But you could give AND-mode a try too. See these blog posts:

There are several solutions. I think the generic load probably best fits your problem. But you could give AND-mode a try too. See these blog posts:

Not applicable
In response to Gysbert_Wassenaar

Thank you very much, Gysbert, for the valuable hints!

I used the Generic Load, which is excellently explained by Henric's blog post which you linked.

The resulting data model provides the fields "CPU", USB" and "Storage" I want to make selections in, in order to filter values in field "ComputerNo." 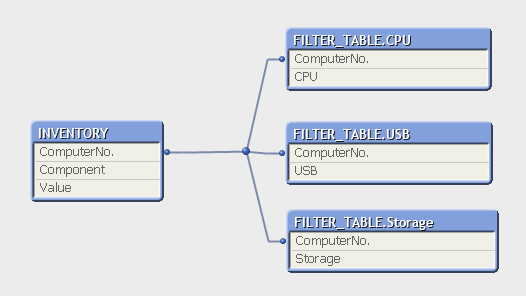 This is exactly what I needed to filter Computers by Component-Value-combinations.