I have used 4 files to demonstrate this. There are two Qlikview documents and two spreadsheets.

Variables (Spreadsheet) - This file describes how should we store Variable information to bring back in Qlikview. There would be two columns First column is the name of variable and the second one is the valid Qlikview expression/Function.

Importing Variables (QV) - This file contains the script to bring variable name and their corresponding expression from spreadsheet and then creating the required variables. 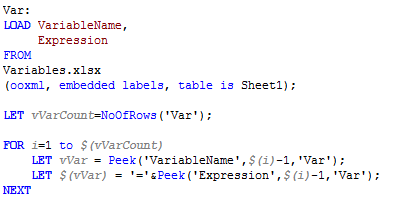 The answer to this question is, of course we can use old spreadsheet again. We will get those variables created but if we want to have the values of those variable from Source Qlikview document we will not get those.

For ex: we will not get the same value for variables in new document,

So, If we want not only want to use same variable but also wish to use same value inside those variables then we have to use this export-import method.

Exporting Variables (QV) - This document will export the variables and the values stored in them to spreadsheet. For this to achieve it contains one Straight Chart with one dimension and expression. And a macro which exports the variable details from chart to spreadsheet(Export_Var).

Good post. It's generally a best practice to maintain variables in an external file and load them from there as you have demonstrated.  While not common, it is possible to directly load variables from one qvw to another using this script:

// below is QVW we want to copy variables from

PS. I think there is an error in your posted code images above. I don't think you want a '=' before the peek() in the image above. It's not in your downloadable sample.

Thanks for your comment. Your solutions are always awesome and inspires me a lot.

is there a way to export variables from the application itself during reload? We would like to use Git as our source control solution for development - but as you probably already know - variable definitions are not saved in the prj folder. My aim is, to export the applications variables at the end of the reload into a txt file residing in the prj folder. After that we will be able to fully recreate the app including the variables. Is there a way to do that? Any advice is appreciated!

In  my experience the best solution is to establish/maintain all variables from script, then you don't have to worry about exporting anything.

If you need to export the current variables you can use a bit of macro code to enumerate the variables and load them to a table and then store that table as a QVD or CSV. See Kamal's sample file for an example of the macro code.

yeah, that would have been the optimal solution but the application I have to work with was created so, that it uses a gazillion variables, many with getselectionfield function, which does not operate in the script (if I am correct). What I could manage to do that with your help though, is to use your code (importing variables from another QVW) and by the 'from' clause writing the URL of the application itself. This way I was able to store the applications variables.

If I have a field name and I would like to use it in further operation in the script, how can I do that?

For better detailed example please check the link and let me know what you think I should do:

Edit Some data according to some criterio from the script