What’s a Weighted Average and how do you calculate it in QlikView?

What’s a Weighted Average and how do you calculate it in QlikView?

Citing Investopedia, the definition of a ‘Weighted Average’ is “An average in which each quantity to be averaged is assigned a weight. These weightings determine the relative importance of each quantity on the average. Weightings are the equivalent of having that many like items with the same value involved in the average.”

I created the below example in Excel to describe the concept:

Assume you have the following data where you have 5 people, 3 of them are 25 years old and 2 are 28 years old.  You then have weightings assigned to the various values:

Step 1 - You would the multiple each value by its weight.  To do this in the example, first multiply each value (Age) by it’s weight (Age * Weight):

Step 2 – Get the total value of all the numbers calculated in Step1.

Step 4 – Divide the total value of Step 2 by the total weight of Step 3: 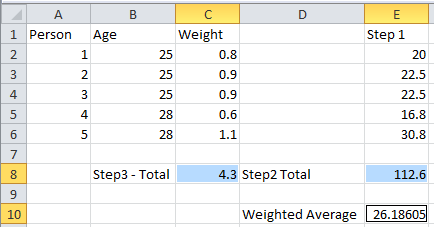 To perform this same operation in QlikView, you would create a Chart – a Straight Table.

The Dimension would be on the Age

To create the total for the Weight, you would use the following syntax:

To create the Weighted Average, you would use the following calculation:

Why you have used the Total key word while calculating the sum of Weight.

In which case we use Total key word and also what is the difference between sum(Weight) and sum(Total Weight).

Are you sure you got this right? I mean the in STEP3. I would say you are supposed to divide it by the actual number of occurrences (number of rows) and not by the weight. You have already took the weight into consideration already by calculating new values. Those new values should be simply averaged now.