Announcements
Do More with Qlik - for Beginners and Beyond, Topic: Qlik Replicate on January 21, 2PM EST. REGISTER NOW
Options
Turn on suggestions
Auto-suggest helps you quickly narrow down your search results by suggesting possible matches as you type.
Showing results for
Search instead for
Did you mean:

I need to create a line chart that has 2 measures, open and close issues. I need to color/shade the area between the measures. Is this chart possible to create in QV ? I am looking at using a mountain chart but I'm not able to achieve the desired color results as attached. 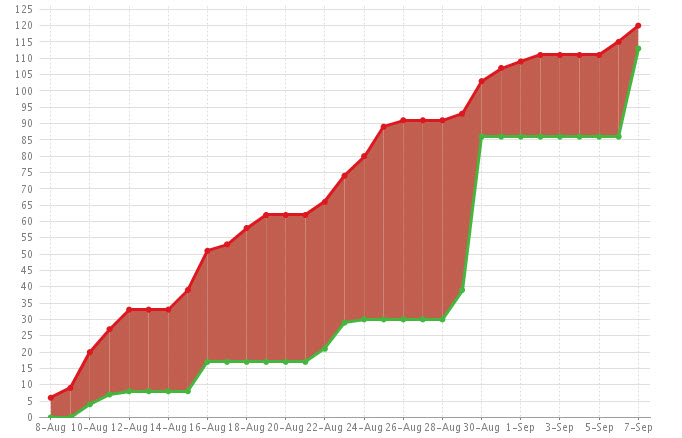 you should be able to change the chart type to filled lines in the stype tab then it is just a matter of changing the fill of the lower line to white, see attached example

i don't know the complexity of your expression, but maybe this could be ok for you.

Not applicable
In response to sbaldwin

Thank you for the response. If you notice in the example, there is a red line (open issues) and a green line (close issues). I'm able to accomplish the area shading between the lines by changing the first expression's background color to white, however, all is left is the red area (open issues). I no longer get the green line since i changed the bg color to white. The requirement is a red line, a green line and a different color to shade the area between the lines.

Hi Stefano, Thank you for responding. Your example is the same as mine. I just can't get the look and feel of what is needed - a green line, a red line and the area shading between lines. I guess it is not at all possible then.

I suppose that u don't want to use an other graph overlapped..

You read my mind. Yes, i don't want to use a chart overlay. so it seems that it cannot be done using the regular line chart.

This would work for display purposes, and you would probably want to turn off pop-ups because the numbers would be wrong because of the new expression.

If I could figure out how to upload, I would attach an example.

sicilianif
Creator
In response to

Yes. To get two distinct color lines with a different color band in the middle, you would need 4 expressions.