Qlik Analytics Platform (QAP) can be used for extranet solutions, where QAP content is published to external users through a webserver. QAP deployed in DMZ will commonly be unable to reach internal data sources and thereby have is unable to reload.

On the internal side of the DMZ a Qlik Sense Enterprise (QSE) environment is placed to allow for app development and internal business discovery.
The DMZ firewall makes it difficult to enable the same app to be published and reloaded on both QSE and QAP.

The QSE server resides on a machine on the inside of the DMZ firewall. Data is fetched through a ETL based structure on the QSE environment, where data from source is processed and stored into QVD files. All internal users access Qlik Sense resources(like Hub and QMC) through this server.

QAP server is running in a DMZ, where a webserver access QAP content and embed in web page(s). Apps in QAP are setup to reload from QC

The assumption for this solution is that QAP and QSE reside on separate physical machines, and that a strict firewall is located between QAP and QSE. This means that QAP can not access any resources on the QSE side of the firewall.

Best practice for data processing is to establish a ETL structure. QVD files are used as the data layer between each of the ETL apps. On QSE side the final app would then load its entire data model from QVD files.

The result of a successful file transfer is that the minimum required QVD for QAP are copied to QAP side. The app on QAP side is now able to reload with same data as on QSE side.

The simplest setup is to manually export app from QSE and import in QAP. The app file would only need to be moved when the layout or structure changes, so the effort should be minimal even if it requires manual work. 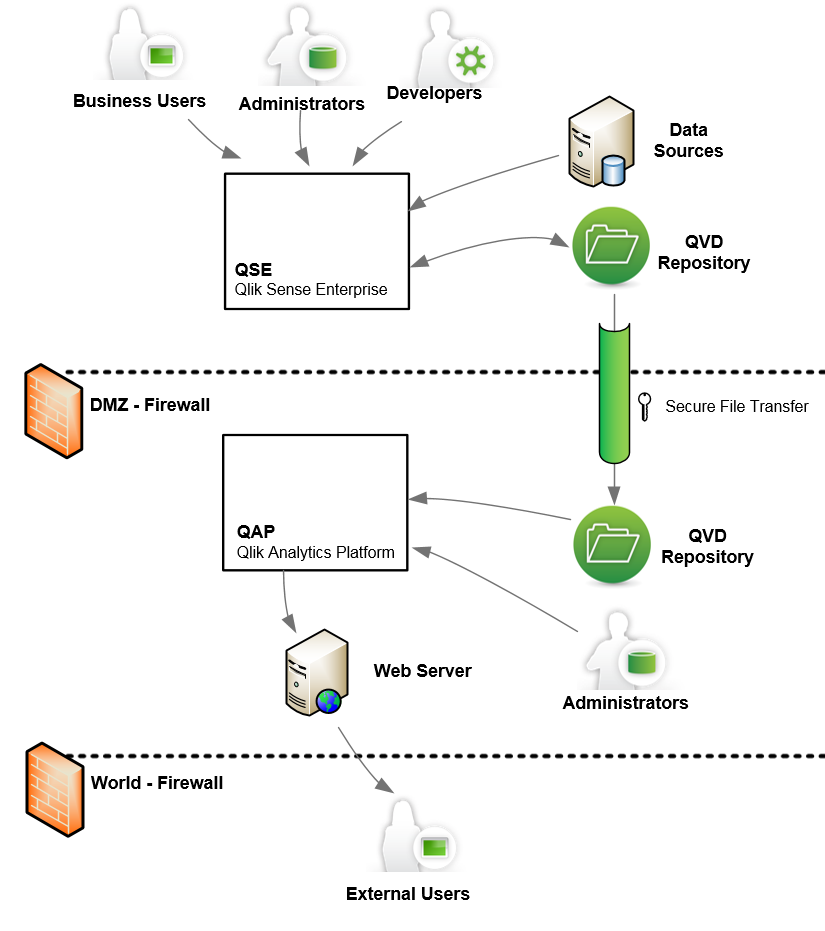