I’m always amazed at what our users create using Qlik products. Today’s Featured Content Friday is no exception. He’s a long-time user (about 20 years) and holds the Owner, CEO, and Consultant titles for his own company.

Robert says his favorite thing about Qlik is: 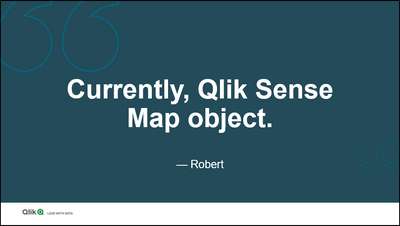 The app Robert created is so unique. It shares a visual story.

I’ll let Robert tell you in his own words about his creation:

“The story behind this chart started with me talking to Shirajul Kabir Rab who I collaborate with a lot on Data On The Rocks and Data On The Earth.

We were talking about trying to find new ways to visualize data, when the idea of visualizing data in a simple landscape came to us.

Since I have been investigating a lot on the Map Object I realised that it is possible to make a Mock-Up chart using the map object to try the idea out.

In parallel to this I also had an idea to make a chart that would be a new kind of network chart, or like a combination of the Scatter chart and a Sankey chart, basically trying to find a way to visualize how one “dot” in the scatter is connected to another “dot” in the scatter. The more ways a dot is connected to another dot, the more lines connects them. I realised that it was possible to make this chart, again as a Mock-Up, using the map chart.

Since the result of this new kind of chart made the object look like birds, I decided to combine this new chart (that I named Seagull Chart) with the idea of a Landscape chart, and this is the result.

In this example, the code is not really re-usable in a simple way for a business application – and should be seen rather as inspiration for new ways of displaying data.

I decided to see the birds as existing customers where the 3 dots that shape the bird represents 3 months of sales. The number of lines between the dots represents how diverse the customer is buying in a scale from 1-3, meaning 3 lines = they buy all kinds of material and 1=they buy as limited amount of material.

The idea of the birds flying in the sky, just like in a scatter chart their position (where they fly) are also carrying a purpose, the closer to the sun, or the higher up, the better “Customers”.

To add more features to the landscape I added a flower object in the bottom which would represent prospects.

The Landscape concept can be applied also to other kind of data (not just Sales), such as this: flowers are new projects, birds are “employees”, and active projects are perhaps trees in the landscape, and employees who are working on a project are “circulating” around that tree.  It can become anything, the concept is really interesting. Was also thinking about other kinds of landscapes, with rivers and mountains. It can visualise many cool things.

The script is very simple, and I am just generating random data to fit the different layers in the map-object.

Not sure how much is needed to explain the map object, as this is pretty self explained for those who know how the map object works.

And the point of this app is not to explain How this is done, rather inspire chart developers to do something new.”

*The information in this post is provided as-is and to be used at your own discretion. Depending on the tool(s) used, customization(s), and/or other factors ongoing support may not be provided by Qlik Support.

Robert also supplied the app and images. You can find the attachments below. Take a look and play around. Hopefully, it will inspire you as well!

Thank you @RSvebeck for sharing your landscape chart with us!

Do you want to be spotlighted in a future post? See our Featured Content Friday Revamp for more information on submitting your dashboards, screenshots, ideas, videos, workarounds, how-to’s, and for your chance to win some Qlik swag!

Thank you for being a part of the Qlik Community and choosing Qlik!