This space is for everyone to ask questions related to the Community Platform. It's a space for us to get to know each other and have some fun! Come in and gather around the Water Cooler! 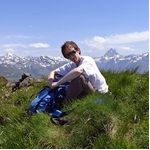 Hello March! Let's make March a month to focus on our most optimistic thoughts and push those positive vibes out into the universe.

This month it is time to feature a Qlik Partner! This Partner stood out in the Community as a clear leader by example. He is always willing to suggest a new idea to help us improve our software. He has been a Community member since late 2018. Since then, he has more than 469 posts and has received nearly 1.5K likes. It is with great pleasure to introduce Qlik's valued Partner, Simon Aubert.

Simon has worked for 13 years for software value-added resellers as a consultant, 8 years specialized in data with several data visualizations and preparation tools, including his first, QlikView, in 2013. Today, he spends two-thirds of his working time on Qlik Sense. He appreciates the Qlik Community for the kindness, the help, and the advice he's received for years. Simon said that without it, most of his early projects would have been dead-end. When Simon participates in a general discussion, he tries to propose solutions. He confesses that he added many ideas into the Community. On that specific point, with experience on several data viz tools and dozens of customers, he always strives to be helpful for Qlik, his customers, and of course himself. He said that Qlik has been good at implementing many of those ideas, more than any software provider he has worked with.

Besides his work, he lives in Bordeaux, France, with his family. Simon spends most of his free time between the forest, the seaside, or the mountains where he goes skiing, hiking, and climbing. He is also interested in the stock exchange, chess, and many other topics.

Let's show Simon our appreciation and give him a "High Five" by leaving a like and a comment for all he does in the Qlik Community. @simonaubert

Thanks that's a real honor for me 🙂