Discussion board where members can learn more about Qlik Sense App Development and Usage.

Announcements
QLIKWORLD LIVE! MAY 16 - 19TH, EARLY BIRD DISCOUNTS! REGISTER TODAY
Options
Turn on suggestions
Auto-suggest helps you quickly narrow down your search results by suggesting possible matches as you type.
Showing results for
Search instead for
Did you mean:

I would like to implement a feature in the Native Qlik map object (latest version) where I have multiple layers, for example dot layer #1 represents Hotels, dot layer #2 represents Household

I used the dot layer size by feature but that one is not good for displaying radius, it is good for scenarios when I would like to understand which Hotel has the most visitors etc ...

I assume I am not able to use only one long, lat coordinate pair per dot for Hotel radios but I have to generate somehow shape files (polygons  with multiple lang lots) to represents radios correctly, if yes how, and how it can be parameterized and to change it per frontend selection.

What if you combine a dot layer + heatmap? There is an option to use Meters in the heatmap. 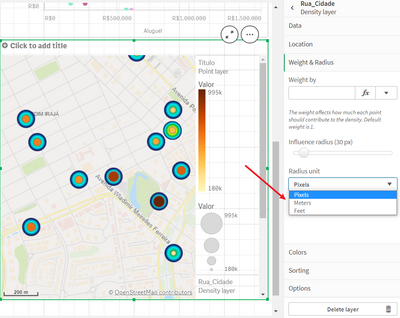 That would solve the 1st point half since with this approach every dot (Hotel) would have the same radios but I would not be able to derive it from the data model like some hotels  might have 5 KM some hotels might have 10 KM of radius, or is it possible ? Also how can I change it dynamically through selections (data model) (2nd question) and how can I get the numbers of overlapped dots (3rd question) meaning per each Hotel radios how many households belongs ?