With the release of Qlik Sense February 2019 comes the Visualization Bundle which includes seven popular visualization extensions.  Today, I will blog about one of these extensions - the Funnel chart.  As described in Qlik Sense Help, the Funnel chart can “show values across multiple stages in a process.  They can represent anything that is decreasing in size.  The funnel chart shows a process that starts at 100% and ends with a lower percentage.  The decrease of each stage is noticeable and at what rate.  Each chart segment represents the value of a specific item and can influence the size of other segments.”

Let’s review the differences between these funnel modes. 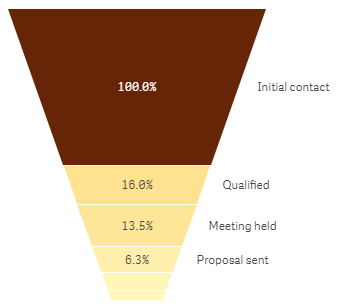 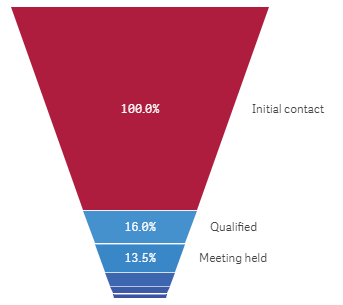 Height funnel mode looks very similar to the Area funnel mode except when using height funnel mode, the height of each item is proportionate to the measure.  In the example, the larger the number of leads in a stage, the taller the stage in the Funnel chart. 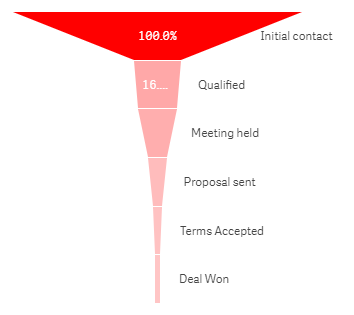 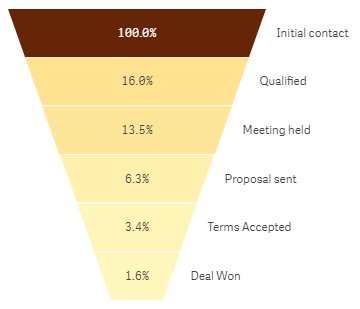 Why Qlik has created a separate Visualization Bundle? Why are these not a part of standard charts?

My personal understanding is that these visualization have been created by open source community, hence to preserve the credits Qlik has chosen this way of implementation.

Nice chart, but is it possible to set a specific order by category?

It seems that the order depends on the value, but this is not always true... is there any option where we can specify the sorting field?

Hi, I have the same question. I  do not want this to be sorted numerically. I want it to be sorted in a specific order that I can select (for example numeric , load order etc.) is that possible?

Is it possible to add the counts and the percentages at the same time?

I have been looking all around but it seems that isn't an option.

Subscribe by Topic
Previous 1 of 17 Next
Tags
View All ≫