I'm facing a trouble with a radar chart I want to use in one of our dashboards: ¿how can I to sort second dimension on this kind of chart?

I mean, I want to use radar chart to show how the number of calls change by hour, as an analogic clock. But I'm hitting a wall because hours don't order itselves.

This is my "crazy clock" 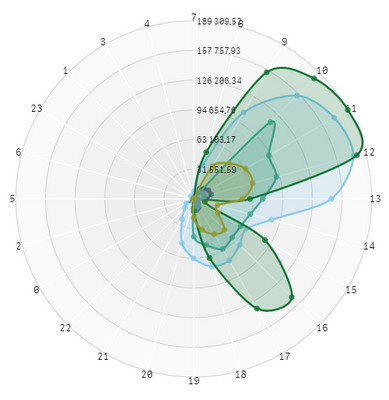 I tried to load data ordering by "hora" field but it doesn't work.

Does anybody help me?

Finally, We found the "solution" to this behavior.

I hope you can understand this text.

Finally, We found the "solution" to this behavior.

I hope you can understand this text.

I am also facing this issue. I'm not sure where to make a request to have a feature added to be able to sort by second dimension but would like to do so if someone could point me to that.

I have found a partial workaround to this issue.

Create a calculated dimension for your first dimension in the chart as:

Qlik Sense will naturally sort the dual values by their numeric value before their alphabetical value so the first value, with all of the values for the second dimension, will be first and your clock will be correct.

This will only work if you have a value in dimension 1 that contains all of the values of dimension 2 but it's better than nothing.