Announcements
QlikView forum consolidation is complete. Labels are now required. LEARN ABOUT LABELS
Options
Turn on suggestions
Auto-suggest helps you quickly narrow down your search results by suggesting possible matches as you type.
Showing results for
Search instead for
Did you mean:

I have an excel file with a chart. Some of the values of such chart are linked through quite complex excel formulas to a variable which is in the same excel file but our of the chart. I would like to make a "What if Analysis" in Qlikview obtaining different values for the data of the chart as I give different values to the mentioned variable.

Is there a guide I can follow to do such thing?

Here is one way to do it

Result should be as follows: 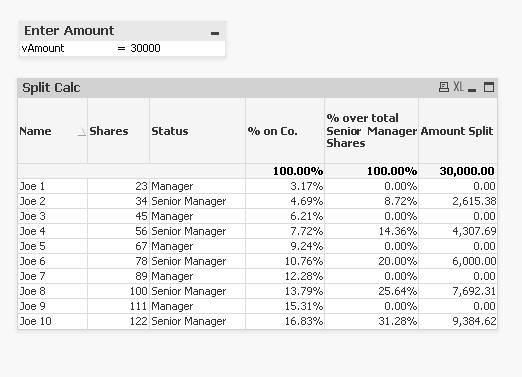 Is this what you need?

1.     You will need to create a Variable in Qlikview

3.     Create an Input Box, displaying the Variable created in Step1

The input box will allow you to select values for the variable which will be used by the expression to calculate the chart values.

Thanks for your reply. I understand and you are right: that's what I need. Problem is that my degree of sofistication coding Qlikview formulas is very low and I was hoping there was a way around that. I realize there isn't.

Would be usefull to have a full guide of paralel analysis excel-qulikview.

Thanks again for your help.

Qlikview really does'nt work like an excel file. Don't try to replicate excel formulas, but try to get the same result with qlikview method.

To help you, can you give us some example of your data and the result you need ?

First thing - I am not an expert Qlikview user!

As an accountant, my background was in Excel before I started using Qlikview.

A good understanding of Excel helps, but you do need to change your thinking to really understand Qlikview.

This is a challenging (but enjoyable) part of the process.

How to replace the Lookup (Buscar) function was one of the things I had difficulty understanding.

Here is what I would do.

There is now an association between Table1 and Table2.

If you build a chart with Table1.ColB as a dimension, and introduce Table2.ColC into an expression, it will compute the value of Table2.ColC associated with the ColB value.

You can also use Left Join:

The other elements of the formula are variables.

If variable is a constant n and applies to each value of ColB, just add a line to your script:

This will create a field C19 for each line of data, with value n (equivalent in Excel to column named C19 with value n in each row).

C19 will then appear as a Dimension for inclusion in expressions.

Thanks a lot. That's great help. I'll try to make it happen.

Not applicable
In response to christophebrault

OK. Here goes a simplified version of what I need. I have an amount, say, 30.000, that I have to split among a group of guys. These guys are either Managers or Senior Managers; the criteria to split are these:

- They have to be Senior Managers; if the are just Managers, the get no split

- Both Managers and Senior Mangers have shares on the Company

See the chart as an example:

I would need help to calculate on qlikview the three columns on the left ussing different values for the amount to be split (30K in the example).

Again, thanks for your time and help.

Here is one way to do it

Result should be as follows:

Great. I got it working. Thanks a lot.

That's great. Delighted to be of assistance.