Copy Selections from one field to another

I often hear from QV Designers that they want to transfer a selection from one field to another (provided that those two fields have the same values in common). Or similary, to transfer the selections of just one given field from one state to another.

There is a simple and readable approach which is good to transfer just a couple of dimension values ... and there is a formula to transfer even millions of selections in a second or so.

COPYING JUST A FEW SELECTIONS FROM ONE FIELD TO ANOTHER

Separate values with Pipe | and put brackets around. However, this syntax supports wildcards (that's good) but does not support spaces in the values (that's bad). But if you put a single-character wildcard "?" instead of a space " " you can achieve very likely the desired results.

By the way, the same syntax is supported anywhere in the frontend when you type to search for fields! Use * and/or ? wildcards, the pipe acts like an OR. Below example means: All codes containing the combination UT or SA:

To produce this by an Action (Button, Textbox) put the following 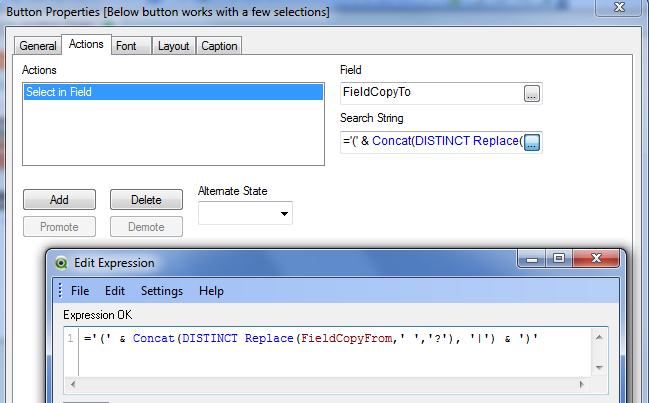 COPYING MASS SELECTIONS FROM ONE FIELD TO ANOTHER

Use the AGGR Function with one dimension to create a on-demand cube (a "vector" of values), and pass this to the target field. The AGGR function has the dimension "FieldCopyTo" and the simpliest Aggregation function Only() with a set-modifier inside. The set operation is the key here: <FieldCopyTo=P(FieldCopyFrom)> .... the rest is nerd syntax 😉

Only disadvantage is, that the FieldCopyTo will only further narrow down the selection if you do not reset the selection first. So you should put two actions: "Clear Selection" of field "FieldCopyTo" first and then this action: 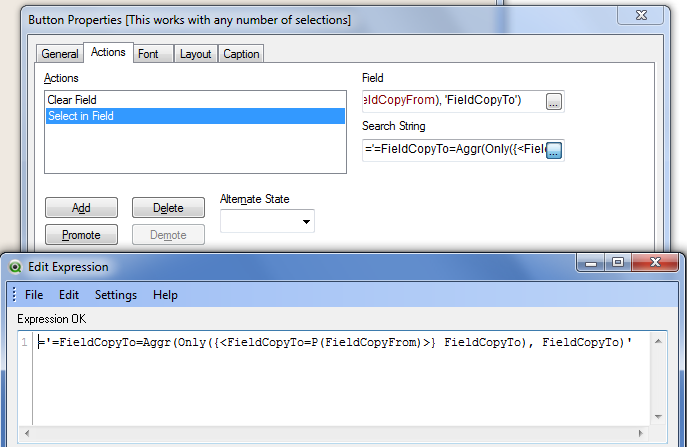 COPYING SELECTIONS OF ONE FIELD FROM ONE ALTERNATE STATE TO ANOTHER

The approach and the syntax to copy the selections of just a single field from one state to another is similar to the above with a slightly adopted syntax, as two different alternate states are now involved and the field name is (assumed) to be the same.

If you copy from the main state into an alternate state, this is the syntax (the essetial part herein is $::CopyField )

If you copy from an alternate state to another, this is the syntax (the essetial part herein is [SourceState]::CopyField )

Don't forget: Start the action block with a "Clear Field" action first, as otherwise the selection of that "=Aggr..." function can only make the previous selection more narrow but not wider!

Both Actions need to be set to work in the "TargetState", in my case "State2" 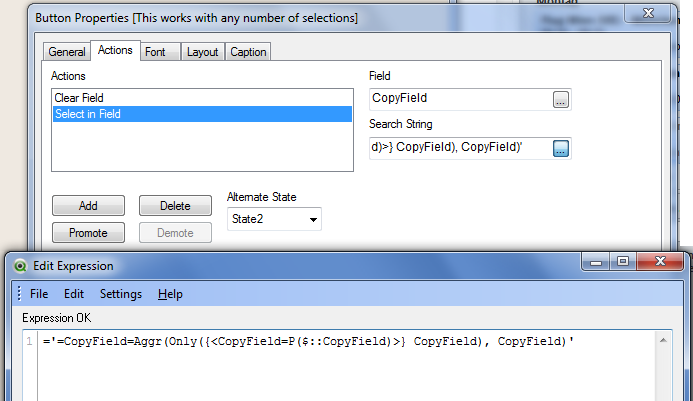 If you don't want the user to wonder about the strange formula in the "Current Selection Box" and to start questioning which drugs you took to write it, put a third action after this: "Select Possible". This will resolve the formula into somehing like this

Feel free to download the my attached example, where all this code is presented and can be tested

That is excellent. Why not create a document? Rather than a discussion that will be "forgotten" in few days ? In other words, is is the right place ?

I did not know the trick with aggr().

Good. Point. I don’t know how the “document” section is organized. I keep creating posts in the default area and this is “discussion” … Can I still move this content?