Announcements
Support Case Portal has moved to Qlik Community! Read the FAQs to start exploring Support resources.
Options
Turn on suggestions
Auto-suggest helps you quickly narrow down your search results by suggesting possible matches as you type.
Showing results for
Search instead for
Did you mean:

Why when I add an expression as a variable in the script, does it give me an error and if I do it from the variable panel is it ok?
The inconvenience I have with the expressions that contain set analysis, is it possible to do it? 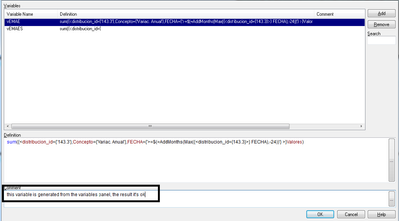 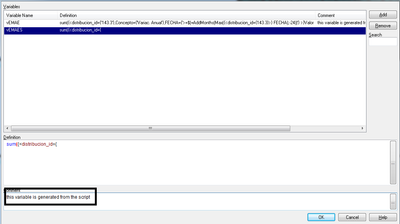 I found an interesting solution:
with this script you can load expressions from excel, since there are no problems with single quotes, it is also much easier to administer

It would help if you posted the part of the script that generated that. Most of use can't mind-read qlikview documents on other peoples computers.
What is going wrong are the single quotes. You need to either escape using double single quotes or chr(39) or another placeholder character that you later replace with the single quote

But you're not done yet because $(...something...) will be evaluated in the script too and you don't want that. So you can use the replace trick again

the problem is the single quote which tells the script that it is at the start or the end of a piece of text, so you need to swap that for a chr() reference such as:

It can become quite long winded doing this in the script, but its the only way I've found to make it work.

tincholiver
Creator III
Author
In response to Gysbert_Wassenaar
here it's how i load the variable in the script:

I found an interesting solution:
with this script you can load expressions from excel, since there are no problems with single quotes, it is also much easier to administer