Sublime Text is my favorite editor - and I use it for QlikView load scripts and externally stored expressions for quite some time now.

Gradually my QlikView language plugin took a form so now I would like to introduce it to community.

Here is a snippet from qlikview-components highlighted by plugin. 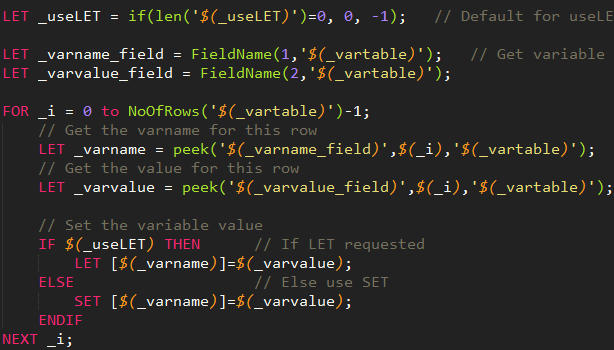 Within the last year we used this plugin in out QlikView projects and futher developed it.

In the present it is set of tools.

The description of work with one of tools of this set is here: InQlik Expression Editor in QlikView Deployment Framework environment

I've only just started using QlikView but I'm already working at a high pace thanks to this sweet plugin! The main benifit (except the pretty colors

) is the ability to get a good overview of your entire project, and be able to jump between scripts!

The one thing I would love (if you're taking requests), is the dropdown menu you get in the QlikView Editor with all availible functions that begin with the letters you've just typed (at the moment, your plugin just gives me a list of any strings in the current document that match what you're typing). Is that anything you think might be added in the near future?

Actually completions for qlikview functions were part of the package but have been removed not so long ago.

They somewhat irritated me constantly appearing on typing - there is vast amount of functions and often suggested list contained not functions instantly needed.

However you may try by yourself and make your own opinion, maybe they would be usefull for you.

I don't suppose it's possible to also add the syntax help that's availible in QlikView Editor?

Well, some quite similiar can be achived in Sublime too.

Try to put attached file in the same User directory as file from previous comment.

That should give you intellisense-like autocompletion with syntax help, then when you insert lookup function into editor you can move between parameters by TAB key, immediately replacing their mnemonic names by your actual parameters.

There is some restrictions in that method (by now we using snippet not completetion file) - you should type first character in lower case `lookup` to get suggestion list with that snippet.

Update: Now looking at this I think variant with snippets is rather nice. I'll try to add snippets for functions to my package soon. Although maybe not for all, and maybe gradually.

I don't know if packages in Sublime auto-update, but I'm thinking Yes, because the following just happened:

1. I never had time to try the lookup-snippet you included until right now, after you release the update

2. I copy the lookup-snippet to the same folder as before and right away Sublime tells me that it couldn't load the package at all (and all the colored text went back to white).

3. I remove the snippet and restart Sublime. Same result. I flip to another textfile. Works.

4. I flip back the the file that had gone white and am now able to set it to InQlik>QlikView script file and formating comes back. Also present however are the paramters etc.

So anyway, I think that having both the updated version of InQlik AND the lookup-snippet will bugg the system out!

If you installed Inqlik-Tools by recommended way (through Package Control) Sublime upgrade it automatically.

Often after version upgrade currently open documents fail to apply language settings. In that case problem may be resolved in nextsteps:

1. Close all opened tabs in Sublime

Snippet and completion file from my previous posts are now redundant I would recommend to remove both from User directory.