Announcements
We value your feedback – take our 5-minute QlikView modernization survey
Options
Turn on suggestions
Auto-suggest helps you quickly narrow down your search results by suggesting possible matches as you type.
Showing results for
Search instead for
Did you mean:

Strange Issue or Bug in Qlikview (Select from Table)

I recently had a  new issue in Qlikview which I've never seen before. First, I was thinking to escalate this issue by registering a case with QlikTech. But I thought this might me a known issue for some users.

I was just pulling 4 fields from SQL and my query in Qlikview is:

After Reload, what it is doing for some ID's, it is clubbing them into one against one code but in source data they are not related to each other.

But when during load time when I use Where condition for one particular ID then data is coming different which is right and when I'm not using any Where condition that it is clubbing 2 names against 1 ID.

Let me explain with an example. 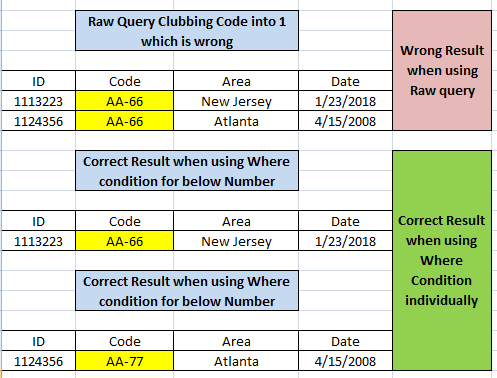 When using both ID's in where condition then also it is giving wrong result and it is clubbing them against one code.

Does anyone has ever faced such strange issue or do I need to register a Case with QlikTech.

Can you show a screenshot of your data model?

Thanks for replying. Actually, I'm just working with a single table and this is giving me the wrong result.

Honestly speaking, I'm not able to justify this behavior to the Business Users.

Qlikview is displaying result which is not in the source table.

Should I register a case with QlikTech for this Bug.

rwunderlich
MVP
In response to erric3210

Hard to say without seeing what you are doing/seeing in Qlik. What you posted looks like something from excel. Sure, go ahead and contact Qlik support. They can help you sort this. let us know what you find out.

This is a Output from SQL which I'm using in Qlikview.