I have two tables with time values and need to calculate the variance between the two times (OPEN_TIME and OPEN). I'm able to combine the two tables into a singular table (DATA) as I believe this is necessary. I'm not sure how to proceed from here though. As you can see in my snip I originally tried inserting it in the last LOAD, but I assume b/c the table isn't "finalized", OPEN_TIME isn't found as it's still technically in DATA and the two tables are not fully joined at this point in time?!?

So I then tried adding another load to add the calculation and although it doesn't fail, the dimension VARIANCE does not populate in my dashboard.

FYI - I am able to calculate VARIANCE utilizing the formula within the dashboard, but I also need to COUNT the facilities over a certain threshold in minutes and that is not working out for me. So my new plan is create VARIANCE and another dimension (YES / NO based on IF statement) so that I can more easily count that within the dashboard. I'm open to other ideas though from the QLIK pros! Thanks in advance 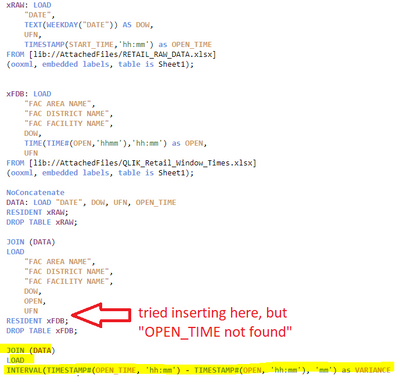 If you found help, mark the correct answer and give some likes to ALL contributors, that tried to help.

If you found help, mark the correct answer and give some likes to ALL contributors, that tried to help.
152 Views
0 Likes
Reply