Announcements
Don't miss the upcoming Q&A with Qlik session on Qlik Application Automation on November 16th! REGISTER NOW
Options
Turn on suggestions
Auto-suggest helps you quickly narrow down your search results by suggesting possible matches as you type.
Showing results for
Search instead for
Did you mean:

what i want is the following:

if a rep logs in the app:

1. in the rep sheet, he only sees his numbers.

2. in the regional sheet, he sees his entire region.

@Henric_Cronström if you be so kind to suggest something, i'd really appreciate it.

If you have two tables, one with rep data and one with region data, this should work straight away. 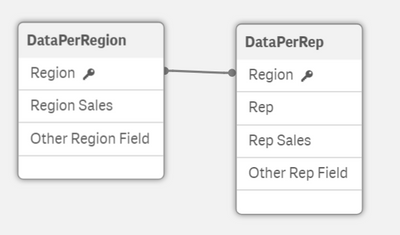 Just create a Section access with Rep as reducing field, and you will get exactly what you want.

Note that you will then calculate the Region sales from the region table. You cannot use the [Rep Sales] field and accumulate this to region level.

Thank you for your input.

I am unable to get both views working at the same time. I have the following data model:

I have a few fields that are similar between the Rep Table(RepActuals) and the Regional Table (FINAL) so naturally i have a synthetic key. Then i have the following in my section access script :

But in this way, i only see the numbers at Rep level and not at Regional level. Could you point out as where i might be going wrong at this?