Discussion Board for collaboration related to Qlik Sense Mobile.

This article is a comprehensive guide on the current integration of Qlik Sense with VMware Workspace ONE (formerly known as VMware AirWatch) as of 31 March 2018.

Qlik Sense requires that clients and intermediate infrastructure support websocket connectivity for retrieval of Associative datasets between the Qlik Visualisations and the Qlik Sense Proxy service. Websockets are part of the HTML5 standard, but many proxy servers fail to support it; iOS v11 has resolved previous issues with routing websocket traffic via any per-App VPN. Remaining connectivity problems are now due to configuration/limitations of EMM and other network infrastructure. 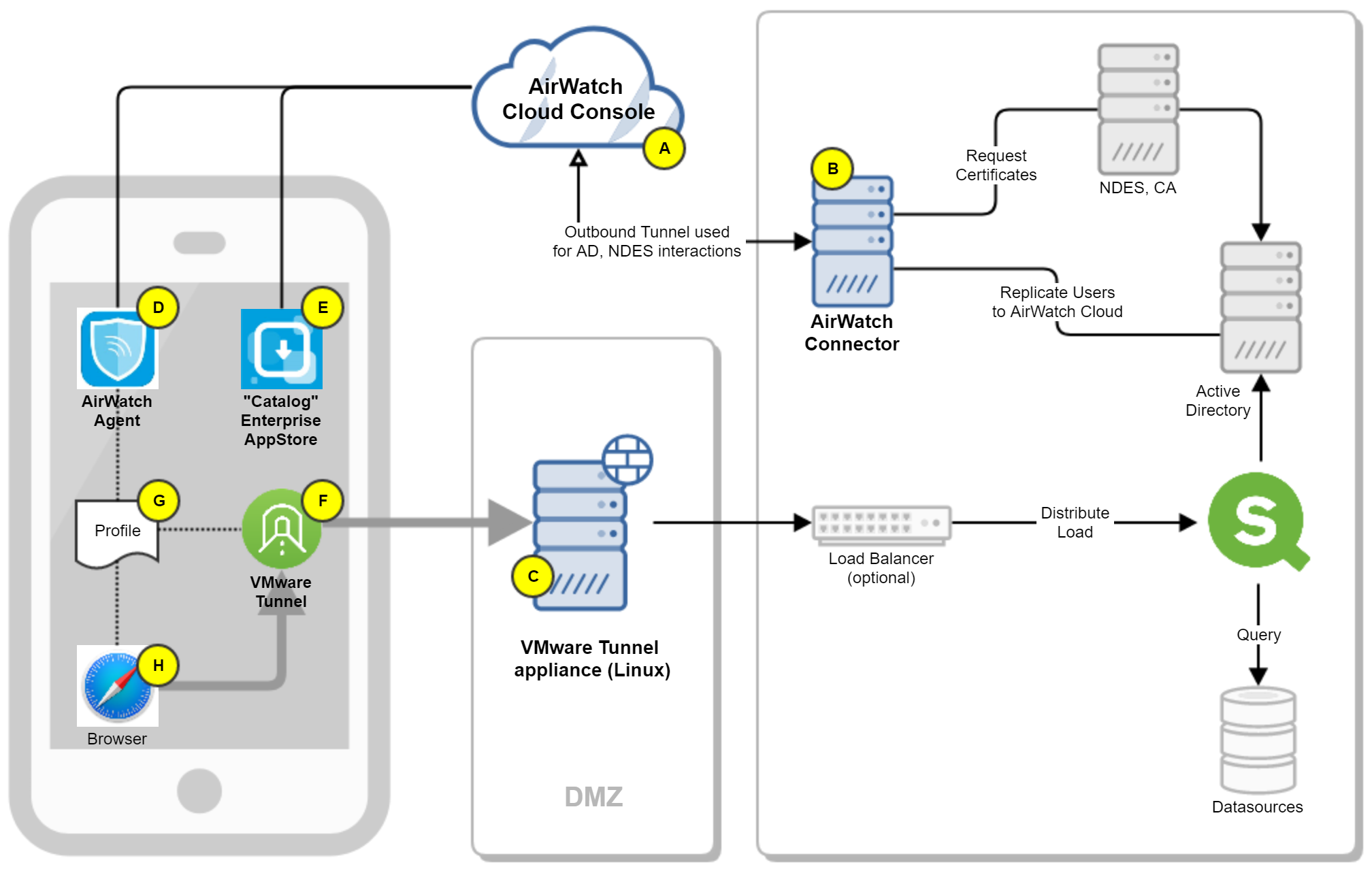 (A) Customer can register to the SaaS AirWatch Cloud, or implement the AirWatch Console onPremise (v9.1.1.19 or later)

(B) AirWatch Connector5 is installed behind the Firewalls, providing replication services from Active Directory to the SaaS Console. The software is configured and downloaded from the AirWatch Console.

(C) The VMware Tunnel is deployed on a Linux6 host in DMZ as the VPN gateway to private resources. The software is configured then downloaded from the AirWatch Console.

(D) The mobile user performs Self-Service enrolment by browsing to the AirWatch Console, and this downloads the AirWatch Agent from iTunes. The Agent is the tool which AirWatch uses to manage the device.

(E) Successful Enrolment will add the Enterprise AppStore Catalog, which is where Managed Applications can be installed from instead of the Apple App Store.

(F) The VMware Tunnel VPN client may be automatically installed by the Agent, or can be downloaded from the Catalog. This will use an SSL Client Certificate (G) to perform Device Authentication to the VMware Tunnel server and create a Tunnel through which traffic from Managed Applications can reach private resources such as Qlik Sense.

(G) Configuration details are delivered by the Agent to iOS as “profiles”. These are visible in the iOS Settings application. A profile may include Rules for which Browser uses the VPN to access which URLs, but also other features such as WebClips (URL Shortcuts), Email Configuration and SSL Certificates.

(H) Safari or a Managed Application (eg Qlik Sense Mobile or VMware Browser installed from the Catalog) will use a Profile (G) to determine whether it should have an exclusive and private (per App VPN) conversation with the VMware Tunnel (F) VPN client to access a Qlik Sense URL.

Note: VMware AirWatch includes a VPN connectivity component. On the client-side the “AirWatch Tunnel” has been superseded by “VMware Tunnel” though they both have the same functionality. On the server-side, older AirWatch implementations may still comprise the “Mobile Access Gateway” (MAG) typically running on Windows. This often operates only as an SSL Reverse Proxy, and does not support the long-duration bidirectional websocket connections that Qlik Sense uses to deliver associative data to the visualizations.

VMware states6 that the VMware Tunnel service MUST be deployed on Linux to support the per-App VPN connectivity that Safari and VMware Browser can use to interact with Qlik Sense. Neither Qlik nor VMware can support connectivity to Qlik Sense via the Windows “MAG”, and VMware customers are advised to adjust their AirWatch deployment accordingly.

A diagnostic webpage can be downloaded from branch.qlik.com7 and should be deployed into the Qlik Sense Content Library via the QMC. Access this deployed content using mobile browsers to determine if websockets are supported by the browser, VPN and other network infrastructure. Load Balancers between the Qlik Sense Proxy instances may require additional configuration8 to support websocket traffic.

Qlik Sense Mobile provides an online alternative to a browser, and implements our Associative Engine on iOS to also provide offline data analysis on Qlik documents that have been synchronised to the device.

Qlik Sense Mobile is already supported for deployment and configuration by AirWatch, and from 30 April 2018 is also supported for operation together with the VMware Tunnel per-App VPN.

Qlik Sense Mobile is currently available from the Apple AppStore 9 and can be added to the AirWatch App Catalog as a Managed Application.

When installed from the AirWatch App Catalog, AirWatch can supply configuration details too. A single text variable "mdm" can be specified, as documented on at help.qlik.com 10, and contains a JSON array that delivers a collection of Qlik Sense Hub URLs to Qlik Sense Mobile rather than requiring that users browse to the Qlik Sense Hub and download a "Client Authentication Link".

This can also be represented by a single block of XML as per the AppConfig Specification. e.g.

It is clear that per-App VPN connectivity is required for Remote/Home office users who want to interact with Qlik Sense online or to sync documents to their device for offline use, and as 30 April 2018 the AirWatch per-App VPN is supported for use with Qlik Sense Mobile with some configuration adjustment described further below.

The VMwareTunnel per-App VPN also works satisfactorily with mobile browsers as described in an earler section.

Within the Qlik Sense Management Console you must configure Security Rules to permit Offline use of Qlik Sense documents. An example is provided at help.qlik.com 11

Only Users with a User Access Token can use Qlik Sense Mobile offline. Login tokens may not be used to synchronise content for Offline use.